It is the era of ‘challenger brands’ – smaller companies that confront powerful firms by simply being individual, fun – almost irreverent. Opting for a strong narrative that portrays almost a human touch, they are gaining customer respect especially at a time when big brands equal big money, and the greed associated with the current economic slump.

Apple is one of the most successful challenger marques, its boss Steve Jobs famously claiming: ‘Why join the navy if you can be a pirate’. With innovative and timely products – iPod, iPhone and iPad – it has managed to muscle in neatly on PC’s market hegemony. But can this be applicable to the equally competitive world of cars?

Carlos Ghosn Renault-Nissan’s chief executive officer seems to think so, which explains has positioning of Nissan’s luxury arm Infiniti in Europe. ‘Infiniti is not about doing what everyone else is doing,’ he boasts. ‘It is not about copying traditional, conservative notions of luxury,’ he says concluding: ‘We will not try to be all things to all people, but everything to some people.’ 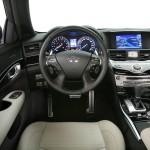 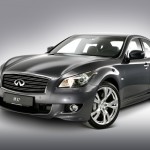 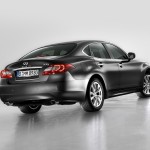 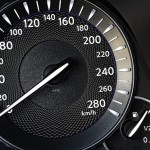 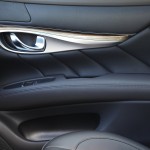 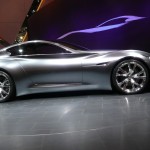 Infiniti’s life to date has been a rather complex one. Although Japanese, it does not exist in Japan – its sole market being America where it has enjoyed relative success for the last 20 odd years. The products sold there have been rather dull and the expansion to Europe has prompted a rethink of the marque’s design language.

Arriving in Europe almost two years ago, the cars were introduced gradually to key European countries supported by identical showrooms, all carefully designed to resemble luxury boutique hotel lobbies. There are now 38 dealerships dotted across Europe.

A strong brand identity has been at the heart of the European launch. Nissan Group Design Director Shiro Nakamura who directed the Euro launch with immaculate precision from his Tokyo base – even the staff’s business cards were signed off by him – said at the time: ‘It is the seductive alternative’.

Italy and Spain were instantly seduced, but crucial markets like Germany and the UK have proved trickier partly for the lack of a favoured executive saloon model. The arrival of Infiniti M this year hopes to change all this. The idea is that M’s individuality will win over customers from heavyweights like BMW, Mercedes and Audi. Design is therefore one of its high selling points.  Based loosely on the evocative 2009 Essence concept car, the M is a strong representation of Infiniti’s new design direction, revealing a confidence lacking in its previous products.

Design has been inspired by nature – the exterior sculpture takes from the free flowing form of waves so evocative of Japanese prints. The visual movement continues inside with strong references to what Nakamura calls ‘old Japan’. The sweeping light stroke of the Japanese paintbrush has inspired the treatment of metal inside the driver and front passenger doors, the leather padding underneath references the elegant folds of the Kimono, and materials used on the Samurai sword have helped some of the colour and trim options.

There is a strong appreciation of the qualities of light, proportion and material in the cabin, and there is the luxury of stuff: soft leather seats, hand-buffed Japanese ash wood trim with powdered silver finish and a clever Forest Air climate control system that sends out a range of scents to alter the mood, wake up the senses and make for a more pleasant drive.

Crucially, the petrol and diesel models available now will be joined in 2011 by modern engine, a petrol-electric hybrid to satisfy an increasingly eco-conscious Europe. Product manager Gert Van Advondt also hints at a smaller electric car for 2013 that will use the next-generation Nissan-built ultra thin and powerful lithium-ion battery.

Jaguar, very much a challenger brand, has raised its profile immensely through wonderfully individualist cars like the XF, which like the M subtly challenges the rather conservative executive business car segment. To success, Infiniti, like Jaguar, needs to maintain the current spirit of individuality, and a confident narrative – in this case working with the concept of ‘old Japan’ – to set it apart from the more powerful and established marques.

M joins a Euro line-up that already includes the FX and EX sports utility vehicles, and the G saloon, coupé and convertible. Read our article on the initial launch of Infiniti in the UK published in Wallpaper* and on the new Infiniti M.