Jaguar is undergoing a design renaissance – its latest concept the C-X75 a clear indication of the quintessentially British marque’s confident design language that nods to its rich design history – think the iconic E-Type – whilst discovering what defines ‘Britishness’ in this century.

The interior has been the focal point of current Jaguar design where there is a clever juxtaposition of high technology, taken from the world of electronic device, and old-fashioned craftsmanship.

Design Talks caught up with interior designer Alister Whelan and experience design manager Mark Humphreys at their studio in Coventry, UK to find out how the design team fuse these two very different worlds yet manage to maintain the Jaguar identity. 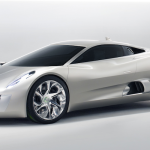 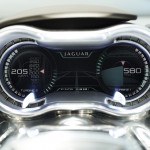 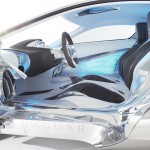 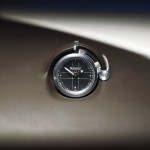 Design Talks. Interiors are increasingly the selling point with cars. When did you start being influenced by electronic gadgets and devices?

Al Whelan. When we started work on the XF, Motorola had just launched the original Razr mobile phone. With the Razr it was about the beautiful use of materials, used on the switch controls that would have normally been in black plastic. Motorola used a premium material and made a signature of the lighting – of how the lighting encapsulated the controls.

On the XF we created a halo light around the switches and continued this into the XJ and the concept car. On the first generation Razr phone you had an aluminium film running across the switches and we wanted to achieve this feeling of precision and the idea of night time illumination.

Mark Humphreys. The XF was definitely the car that really opened our eyes to the opportunities of using technology, and then executing it in a way that is intriguing and fun. Off course the lead-time with electronic gadgets is so different to cars so for us the idea is to understand the core values and to extract that.

DT. How do you make interior design more individual and quirky?

AW: We have a little bit more of a licence to do things that are more tongue-in-cheek. On the C-X75 we used wood in an honest and authentic way where we scorched the wood by a local sculptor to give it a silky finish. It’s about using traditional material in a contemporary way. (Design director) Ian Callum stresses we have to have fun with design – a bit like Paul Smith.

For this car we were inspired by aviation and aircraft cockpits where we tried to get the right balance between digital and analogue. For instance, we introduced a door design that is very organic and flowing but instead of crafting in the door handle in the door like conventional design, the ejector seat handle are placed between your legs on the seats. It’s beautifully polished aluminium sculpture with some illumination.

DT. How can you interpret something as high-tech as electronic devices for Jaguar?

MH. We visited BAE Systems and observed the work of some of the guys that worked on the design of the Eurofighter cockpit. They obviously come from a very different world but when you dig deeper the actual techniques are similar to us.

What’s interesting is that although in many ways their work is tougher; it is also easier in that they are designing for a specific person, who will be a certain age, height with perfect eyesight. The Eurofighter knows what is has to do so they reconfigure the instrumentation between each mode so they have a different set of displays according to the needed function.

From an automotive perspective, off course this is harder to do. In the CX75 we had the main display in front of the driver and then on the side we had a small touch screen we called the ‘co-pilot’ that is angled towards the driver. It is small and a very high definition screen like the iPhone 4. The co-pilot helps with information on where you need to be; it gives driving tips, and it appears only when you need it.

AW. This had a physical influence on the design of the cabin. Mark’s technology helped us clear away all the unnecessary switches – the ones the car can take care of through the co-pilot. With the primary driving stuff then we could apply real mechanical controls. The main elements of driving have to remain tactile and engaging – almost retaining their traditional feel.

DT. How do you get the perfect mix between the virtual and the physical?

AW. We have to mix authenticity with high-tech and this will set us apart from others in the industry. In your living room you may have a high tech TV but an old Barcelona chair.

On the CX-75 we tried to create this by getting the feel and the weight that is associated with craftsmanship. We tied up with British watchmaker Bremont who designed a beautiful analogue clock on the dashboard – a lovely physical stopwatch that comes out of the car and is powered by the momentum of the electric car, which contrasts, with the high-tech of the co-pilot section.

DT. How will all these ideas filter through to the upcoming production cars?

AW. The world is changing with people spending seven or so hours a day on their personal electronic devices. So let us give people more respect, design switches that are not so simple, are more engaging and give more feedback. Maybe in the future we can take some of these ideas and mix them with something that is beautifully handcrafted.