The taxi cab can be one of the most iconic features of an urban landscape – think the London black cab or the New York yellow taxi. With electric driving considered the most reasonable choice for current clean mobility, it makes sense to turn these often polluting vehicles into something ecologically responsible.

With this in mind Volkswagen has designed a taxi with London in mind that is not only electrically driven, but provides for a modern transportation environment. This is the last in its World Taxis series that has thus far included a Hong Kong, Berlin and Milanese cab. 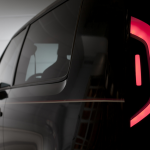 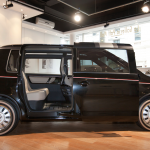 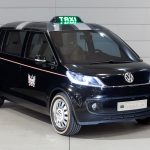 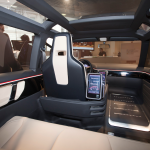 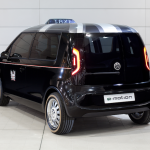 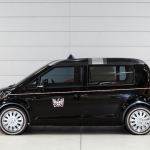 This is a cute and quirky looking vehicle based very much on the loveable iconic original VW Campervan. Head of VW design Klaus Bischoff says this and the original Beetle have been the main inspiration for this concept and the Up city car for 2013 on which the taxi shares its underpinnings. ‘People remember these vehicles positively,’ he says noting that it is this sense of nostalgia that needs to find its way into the entire electric car range.

It is mainly with the face where VW hopes to make a unique impression with this car and the rest of the electric vehicle family. ‘VWs were born with their engines in the rear and so there was an absence of a radiator grille or an opening on the face,’ says the designer. An electric car doesn’t require an opening at the front – there is no conventional engine to cool. Therefore like the Up, the taxi concept’s face has a tiny ring shaped grille, there really to represents the mouth and in a sense complete the face. ‘We wanted to give the car a unique look, but one that is friendly and sympathetic,’ says Bischoff.

The prototype is relatively compact – 3,730mm long, 1,680mm wide and 1,600mm high. The absence of a conventional engine at the front and clever packaging however, has allowed for a pretty spacious interior that can sit a driver and two passengers in individual seats – as opposed to the usual bench – comfortably with lots of extra space to place for luggage.

Daytime running lights mounted within the headlight units are joined by a taxi light on the roof. At the rear the light units are integrated into the split tailgate, behind which are a pair of cubbies to house the driver’s belongings.

The light and spacious cabin is visually dominated by two large touch screen displays – one by the driver and one by the passengers. The driver can personalise the display setting on his display much like a smart phone, and in the rear a similar screen relays information to the passengers on their route and their immediate environment. Plus the reduced colour scheme that includes only a splash of red helps with electricity usage.

It takes just over an hour to charge the electric taxi’s slim battery to 80% of its capacity. The 113bhp electric motor gives a top speed of 74mph, and the 45kWh battery provides a range of up to 186 miles.

The prototype features deliberate tongue-in-cheek details such as the silver Union Jack on the roof and the City of London’s coat of arms on the sides and dashboard.

‘For me London has the most convincing taxi in the world,’ confesses Bischoff. ‘The New York taxi is nice, but not as comfortable as the London cab. It gives the urban setting a unique character, and we wanted to pay tribute to this.’

Read more on the VW  electric taxi cab in Wallpaper*.