With electric driving a reality it seems fitting that carmakers should find a suitable vernacular that represents a new era in mobility. It is also a golden opportunity to voice their unique approach to clean, green driving.

With this in mind French firm Citroën asked final year masters students of vehicle design at the prestigious Royal College of Art in London to imagine a small car that could establish a unique electric vehicle aesthetic for the marque.

The 16 candidates unveiled an inspired range of conceptual work, from subtle interpretations of the city run-around, to ones that shouted out their electric credentials, to those that questioned the masculine nature of automotive architecture. 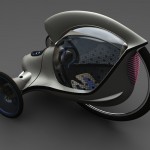 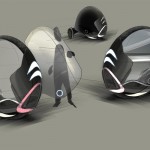 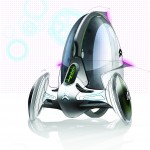 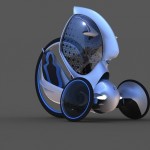 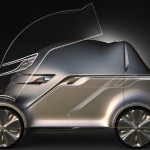 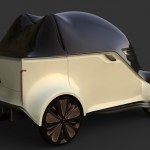 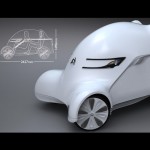 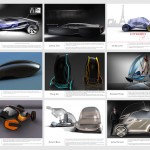 Overall winner Heikki Juvonen’s E-3POD Antistatic and James Harness’ Ugly Duckling, commended by the judges, stood out the most.

Juvonen, who will start a six-month contract at the PSA Design Centre in Paris on graduation, suggests a new type of electric vehicle for urban commuting. The small car has three-wheels, two smaller ones positioned at the front so that the driver sits inside the third larger wheel that includes a hub-less design.

The lightweight modular construction has been designed to be as aerodynamic as possible to minimise the battery size. The silent electric engines also make sound insulation redundant, allowing for this lighter material selection.

Philippe Holland, head of Style Graphique at Citroën, says Juvonen’s design is ‘a quirky and nice sculpture, and an interesting concept for city driving’. Juvonen says his pod will coexist with other vehicles as it has been designed to be an electric product rather than a car.

Holland was also impressed with how Harness showed an understanding for the brand’s design heritage where design is pushed to the very limit with his Ugly Ducking. The concept is a rather quirky piece that purposely contradicts the conventions of current automobile design.

Harness says he is tired of the ‘cliché proportions’ of automotive design, calling it an ‘aggressive pumped and chiselled form language that subversively distributes the idea of personal superiority and dominance.’ Harness doesn’t believe this language is appropriate for a brand like Citroën.

Instead his three-seater car features a combination of stark flat surfaces and organic shapes, ‘a flat/organic form language,’ he calls it. ‘I wanted to combine two form languages, 80s flat brutalism and more modern organic surfacing and to study the differences between them aerodynamically.’ The combination of the curvaceous front and sharp and the flat rear-end, actually proved to be very aero-efficient.

The idea with Ugly Duckling is to stimulate curiosity and engage and excite consumers into electric driving.

Holland says electric driving is increasingly recognised as an important solution for urban transport. ‘So it is fantastic to see the electric visions of these potential car designers of tomorrow.’