This magical bowl-shaped structure acts as a portal to the city of Stockholm and reconnects the fragmented communities that live around the intersecting highways north of the Swedish capital where the giant Hjulsta super-junction is being built.

Danish architect BIG’s Energy Valley aims to join these communities through a continuous circular bike and pedestrian loop aligned with public buildings and functions, including a shopping and sports centre, hammam and mosque. 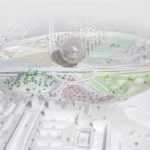 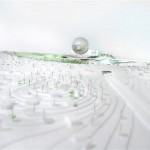 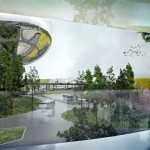 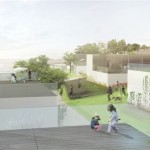 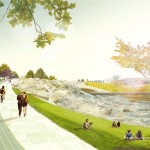 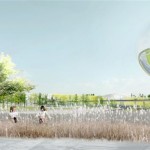 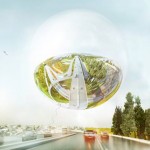 By introducing natural environments of differing characters within the loop, the Energy Valley structure in the centre turns into a pie shaped park of pine and oak forests, wetlands, grass lawns and hilly terrain to create a diverse experience when moving in or around the landscape.

Selected as the winning design for the Stockholmsporten competition, the proposal is very much in-line with BIG’s visionary thinking. Alongside China’s Ma Yansog of MAD, the American Joshua Prince-Ramus of REX and Germany’s Ole Scheeren, BIG’s founder Bjarke Ingels belongs to a group of avant-garde architects who once worked for one of our most advanced architectural practices Rem Koolhaas’s OMA.

Ingels explains his latest creation: ‘Harnessing the momentum of the massive investment in tunnels and highways and putting the excess excavation to use as a man-made valley, we create an interdisciplinary hybrid of logistic, economic, environmental and social infrastructure.’

Around 30% of the sphere’s surface is covered with photovoltaic film that faces the sun and produces enough energy to keep it floating while supplying 235 houses in the neighbourhood with electricity.

In BIG’s vision the new portal will be a reflective, self-sustaining hovering sphere mirroring Stockholm as it is, new and old, creating a 180º view of the area for the drivers on their way in or out of the city.

‘The Energy Valley is a crossover between urbanism, landscape, architecture, art and infrastructure into a new neighbourhood of Stockholm,’ enthuses Ingels.

BIG, alongside Grontmij and Spacescape, are the winning team for the Stockholmsporten competition that included proposal by Norwegian architect Snøhetta, Danish landscape architect Kristine Jensen and Swedish Erik Giudice Architects

Read more about the architect here at BIG Talks Clean Cities and BIG’s 21st Century Urban Living. Also watch this video by CNN which gives more of an insight into BIG’s thinking.