A giant wedding dress is turned on its head and suspended from the huge metal tanks that make up the roof of the former hydraulic power station’s boiler house, descending into a seemingly bottomless tank of water.

The black depths of the darkened space reflects the falling dress, multiplying the image of the voluminous white silk garment as the hat supported by bamboo sticks floats freely.

A boatman rows an old wooden boat gently to the centre of the stage every 15 minutes, the rippling of the water combined with the row of lights that gently illuminate the space, and the calming music, complete this meditative installation. 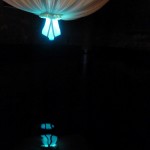 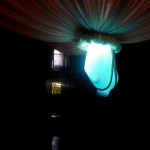 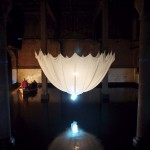 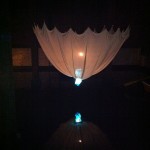 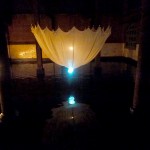 Yohji Making Waves is the work of scenographer and lighting designer Masao Nihei in collaboration with the Wapping Project. The exhibition is the third in a series dotted around London that celebrate the work of the avant-garde Japanese fashion designer Yohji Yamamoto and includes a retrospective at the V&A and Yohji’s Women at the Wapping Project Bankside.

Masao Nihei is a long-term collaborator of the Japanese designer.  The oversized dress is a legendary one from the designer’s 1998 collection and in much the same way, this inspired installation seeks to capture something of the wit and imagination of Yohji Yamamoto whose work has helped transform our approach to fashion design.