We are in the heart of Andalusia and despite it being the very dying hours of winter, the weather is as dramatic as the evocative landscape of this region of southern Spain. We are here to drive the latest BMW product, the 6 Series convertible – a car that promises not just long and lean aesthetics of a gran turismo, but also – much in GT style – a sporty drive in pure luxury. 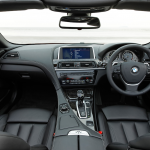 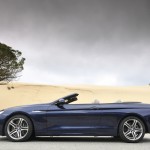 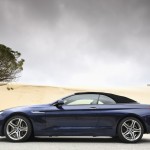 In both its hard roof coupé and fabric top convertible versions, the latest 6 retains the essential GT aesthetic – a two-door coupé sculpture with a long sweeping bonnet, low stance and a cabin set back to enhance these evocative proportions.

Designer Nader Faghihzadeh, who’s proposal won the internal competition for the car, was essentially inspired by the geometry of water. He explores the theme as he talks us around his creation. Yes, he assures us, water does have geometry: ‘Imagine moving water. It is flat but then you introduce distortion by entering a stick into it to create an opening. What you’ll see are hard edges that merge into soft surfaces. The geometry of water became my inspiration for surface treatment,’ notes the Munich-based Iranian designer.

Faghihzadeh continues to explain that the car needed to represent a younger, modern sporty aesthetic. ‘The interplay of proportions and surface detail had to be the focus – the surface treatment needed to create this athletic elegance,’ he insists.

Visual length is enhanced through a single uninterrupted line that runs the length of the car to the rear and over the integrated lights. The surface changes direction only at the very end where it works to accentuate the wheels – a classic BMW design cue to express that this is rear wheel driven.

Faghihzadeh’s aquatic theme continues with the distinctive BMW shark nose complemented by the fin shaped treatment of the soft-top roof at the rear. He notes that apart from housing the glass rear window the fin creates a second section at the boot that looks almost like a boat.

It is not an easy engineering task to attach a coupé-style fabric roof to a car of this length, but the designers were keen to stick to a soft-top aesthetic that signifies a more frivolous open-air drive. The result is an almost seamless fabric roof that opens in a mere 19 seconds and comes in a variety of shades.

Sitting inside, the cabin is highly driver focused with all functions, including the central section of the instrument panel, tilted towards the driver. This is something that BMW is keen to explore further in its more sporty cars. Sadly, material options remain on the more conservative side with the usual choice of leather, wood and aluminium.

Design departments are increasingly on the lookout for alternative materials that signify modern luxury and it would have been a bonus to find some of these ideas expressed inside this car’s cabin.

Modern cars tend to be over styled. Advanced technology has perhaps enticed some designers to do too much surface work and create too many clashing and confusing lines. Here the treatment has been almost minimalist.

Faghihzadeh and his team have reduced the design to a few simple lines to create a car that manages to look lean, elegant and graceful in the flesh, especially in black, which as the designer notes as a parting gesture, was the colour he had in mind when designing the car.

Read about BMW’s Vision ConnectedDrive here, a concept car showing how internet connectivity can enhance the driver experience. Also, read about the marque’s eco ambition and the MegaCity Vehicle here.