Installations by Zaha Hadid Architects, Ingo Maurer, Mini and other world architects and designers decorate the gardens of the Università degli Studi di Milano. On this dazzling spring day their presence visually contrasting with the crumbling beauty of this magnificent sixteenth-century state university building in Milan.

Initiated by design magazine Interni, Mutant Architecture & Design proposes an exploration of the notion of mutant in architecture and design in the context of this space.

The responses have varied from innovative and avant-garde to playful – a giant, somewhat intrusive blue mesh ball named Plasteroid by Jacopo Foggini, to Carlo Colombo’s Green Tower, a large white space housing a tropical garden that creeps up the internal walls. University students lounge in the deck chairs soaking in the northern Italian April sun. 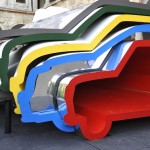 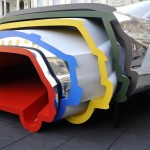 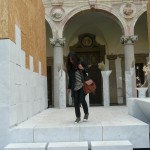 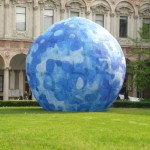 In the peaceful Cortile d’Onore, architect Hadid’s project Twirl is a modern interpretation of the architecture of this courtyard, translated and transformed from rigid Cartesian geometries into the linear fluidity of dynamic space.

The large-scale installation for Artemide almost melts into its surroundings by adapting the natural contours of the courtyard. It emphasises the slopes of the arches, creating a powerful vortex of special distortion that ultimately hopes to create a dialogue with its surroundings of five centuries ago.

Hadid worked closely with Lea Ceramiche, the producer of floor and wall ceramics; manipulating its flexible Slimtech laminated stoneware. Seen from various angles, especially from above, Twirl is quite a spectacle.

At the entrance of the main square carmaker Mini’s Sintesi is another impressive installation, albeit with a completely different purpose. The idea behind this playful sculpture is to capture the evolution of the iconic car, turned brand, through contour lines of various profiles – from its birth as a tiny car in the sixties to its twentieth-century recarnation, and projecting into the future with its twenty-first propositions.

The contours of the classic Mini, framed by the silhouettes of the Hatch, Clubman, Countryman and the most recent arrival Coupe Concept represent the centre point of the installation.

The structure references a fundamental design principle of the Mini family: that all family members emerge from the same core and share the same genes, yet also display some very different and individual characteristics. Therefore the overall form of the installation changes as you move around it, encouraging the visitor to view it from various angles.

The marque’s creative director Anders Warming explains that although Mini is no longer the original micro car, its identity is still of a car that is as small as it can be relevant for its time and purpose.

‘First the theme mutant architecture threw me off a little bit as the word had a negative ring – it has an association with deteriorating,’ says the German designer. ‘But then I got out the dictionary and found out the actual verb is a good enough word, the word is holistic enough.’

The name Sintesi, synthesis, represents the positive side of the word mutant, he explains. He wanted the sculpture to conveys a positive message about mobility. ‘We take peoples’ fears away of ruining the environment just by the positive nature of the product,’ he says.

‘We’re talking about something that is supposed to transfer into the future,’ says Warming, ‘and I believe that’s our job in Mini design is not to constrain ourselves but also not to break with the past. The famous word for Mini is from the original to the original and if it is mutating along the way or continuing, authentic.’ In this context Sintesi works perfectly.

Mutant Architecture and Design was exhibited as part of Salone Internazionale del Mobile, a yearly event held at various venues around Milan from 12-17 April.

Read our other coverage from the show Sestoseno and RCA Intent.