On 18 April, on the eve of the Shanghai Motor Show, Volkswagen unveiled the twenty-first century Beetle at a stylish location on the Bund overlooking the river Huangpu and Pudong with its impressive display of world architecture. International media and flashy dressed local celebrities gathered sipping and nibbling on stylish cocktails and canopies as the silk wrap was ceremonially peeled off this iconic car against a dazzling display of fireworks. 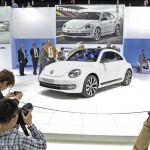 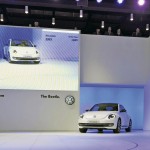 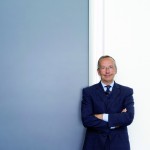 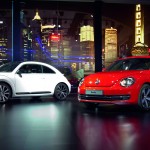 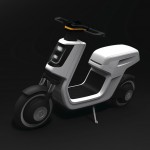 Volkswagen Group China is the oldest foreign maker of cars in the country. The firm entered the market in 1978 establishing its first joint venture Shanghai Volkswagen Automotive in 1984 and FAW-Volkswagen Automotive Company in Changchun in 1991. Since, the German firm has had astonishing success rates – in 2010 alone, selling over 1.9 million cars in its now biggest market China.

It was, therefore, not at all surprising that VW chose Shanghai to unveil this all-important car. We caught up with VW Group design director Walter de’Silva and Asia regional design director Simon Loasby at the motor show the following day.

Design Talks . How did you approach designing a twenty-first century Beetle given the iconic status of the original?

Walter de’Silva . I said to my team we need to return to the original Beetle because the Beetle before this (in 1998) was a nice car but for me the design was too much in the way of a toy, and with this one we wanted to come back with a real car.

DT . How did you achieve this?

WDS . You have to understand that the Beetle architecture is a very special one – it isn’t just about the arch. The front is very very important because it comes from the DNA of the Porsche – this is clear. Only two cars, the 911 and the Beetle, have this face with the round lights, the big wheel arch and so on.  This is because they come from the same father, and this is a great opportunity to confirm our heritage.

It now looks a little coupé too because we wanted to do the roof flatter and faster. We think it looks elegant, much more masculine and sportier than before – and this was the three elements we had in mind.

DT . You have been busy creating some interesting products recently especially in the green segment. How would you define the current VW design direction?

WDS . With the electric Up, the Taxi and Bulli concept (launched in Geneva in March) the design is more product design. When I did a definition of 2011 it is the year of the ‘sympathy’. The Bulli and now the Beetle and then in a few months the electric Up – all these cars have a particular personality in the face, so that Volkswagen is no longer boring. These cars set the pace for a great evolution in our design.

DT . You orchestrate a whole host of brands that includes not just VW but Porsche, Audi, Bentley, Seat, Skoda and Bugatti. How do you manage multiple brands?

WDS . We have more than 100 projects on the table so I have to follow the priorities daily. Today is Shanghai then I am off to Italy then Germany for Audi then Spain for Seat. We have the design criteria for each brand.

There is also a third part to my job whereby we introduce a new platform and have to involve three or four brands in parallel. So my work involves brand direction, inter-brand direction and market direction.

DT . You are increasingly getting involved with Porsche design. What are your plans for the marque?

WDS . I think Porsche has a very strong DNA and you have to be very careful when you touch a Porsche. With [Porsche design director] Michael Mauer we started working together a year ago on the new SUV. The collaboration is very good as we need to do an evolution of the design and it is very exciting to work with them. From the 911 onwards you will see where we are heading. It is amazing the potential of this brand.

DT . You were the first car brand here in China and remain the most successful. But how do you maintain brand loyalty and desirability when so many others are establishing themselves in this market?

WDS . We have to create the desire. We have to provoke here and create expectation – never to be a follower and arrive with the right product. We need products that are unique to each market with customisation and personalisation.

DT . Simon, as VW’s Asia design director you are in charge of the operations in this region. How does this fit into the overall design process?

Simon Loasby . We have two design studios here and our job is to help the VW guys [in Germany] understand what is going on here. How a global brand is clever to go in the right direction to stay global but appeal and be more attractive locally.

DT . Does this region have its specific requirements and taste?

SL . There are different idiosyncrasies. Colour, for instance, means completely different things in different countries – the same with smells. Here you have to get into golds and reds, particularly golds. The temples here are gold and red here; people are living with colour all the time so it is naturally attractive.

DT. What is it like working and designing from China?

SL . We see the middle of the world as the Pacific not Europe. There are a lot of similarities between the US and Asia markets.

DT . The VW e-Scooter concept, just unveiled at the show, is a charming proposition – the tiny two-wheeler sporting a Shanghai city map to add a touch of regional personalisation. Is there a noticeable commitment to clean driving here?

SL . The electric scooter is a new thing for Europe whereas they sell 20 million of these already in China. My cleaning lady arrives on an electric scooter, takes the battery out charges it up. They are mentally used to it and the infrastructure is already here.

DT .  Shanghai, it seems, is also pretty much ahead of Europe in terms of connectivity.

SL . Absolutely. Here the card you have for the underground is linked to everything so you can take a taxi with it, you can get on the train – it is all interconnected. And you can rent our scooter using the same card. We in Europe are behind here.

DT . What is your approach to designing mobility for the increasingly dense cities and of the future?

WDS . We are working with two universities in Milan on a five-year project on concepts of mobility. I tell them to work with a small vehicle but I would like the car to develop in one zone in Milan – downtown in the historical area – because the problem isn’t just to define a new product but to find a product that works in an environment that fits a place.

In 2015 I want to do a big presentation and see what we’ve discovered. I said we can’t solve the problem of Milan but at the end of the five years we can give you some nice products and projects. We can do this in all cities as their needs are the same.

I don’t expect a miracle, but what I would like to see is an intelligent approach to the product, combined with the complexity of an urban programme.