Industrial designer James Dyson is challenging young designers and engineers to come up with problem-solving inventions – much like he did with the innovative bagless Dyson vacuum cleaner back in the 1980s – as part of the James Dyson Award.

The competition is open for entries and deadline for submission is 2 August 2011. Those interested should  submit a footage, images and sketches along with a synopsis detailing the design process and inspiration here. The winner will receive £10,000 to develop their invention, and £10,000 for their university. 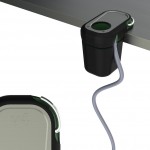 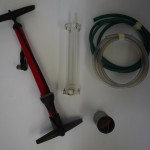 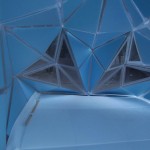 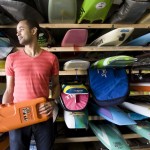 Dyson has already received some interesting entries from around the world. The Flexi-Pipe Pump, for example, is a simple and low cost water pump proposed for the developing world. The brainchild of a British design engineer, it is powered by compressed air that can be provided by a simple bicycle pump.

In order to pump water, the Flexi-Pipe Pump chamber is submerged underwater, the user can then start operating the bicycle pump and with no priming required water is brought to the surface through the hose pipe. The Pump works by air displacement.

Another applicant from Australia has proposed the Vacuum Bin, a radical redesign of the current knock-out bin which is used in almost every cafe worldwide. It uses a small foot pump to pull the air away from the top unit applying suction and removing all the used coffee beans from the portafilter in one large clump.

The Urban Rock is a single person, collapsible, portable shelter equip with a sleeping pad that can be folded up and packed into a compact shape. Proposed by an entry from the US, when fully collapsed the shelter can be packed away into a backpack container for easy transporting.

The industrial design graduate from University of New South Wales in Sydney is now refining the technology with a view to putting it into commercial production.

In 2009 Yusuf Muhammad and Paul Thomas from London’s Royal College of Art won the award for Automist, a fire extinguisher that can be fitted directly onto a standard kitchen tap now on the market.

‘The award champions the ideas of young designers and engineers – encouraging them to develop inventions, defy their critics, and turn them into commercial successes for themselves and their economy,’ says Dyson. ‘We’re looking for the people who rather than accept a problem and make do, design a simple and effective solution.’

The winner will be announced in November 2011. For more visit James Dyson Award.

What was your inspiration for Longreach?
Military training is about the use of lethal force. But my training with the Army Reserves exposed me to hi-tech grenade propulsion technology, which prompted me to explore the idea of making a life saving flotation device that could be safely fired over a long distance.

Have you had a lot of interest in your idea – does anyone want to buy it from you?
Longreach won Silver at the recent Australian Design Awards. My biggest challenge has been converting all the interest into commitment. I’m looking to either license the design or start a company to manufacture and distribute it.

What advice would you give to a student thinking of entering the award?
The reason, I feel that Longreach has been so successful has been the fact that it was novel approach to water rescue, but the research and design considerations that backed it up, made it a very tangible and implementable design.

Make sure you protect your idea. I had a lot of trouble initially protecting my designs because I did not submit provisional patents. It takes a very small amount of time and money to file a provisional patent, but it gives you the opportunity to protect your design if there is interest in it. It is very difficult to do after the event.

What advice would you give a young person considering design or engineering as a career?
Design needs to be a hobby as well as a job – I think about it all the time.  Everywhere I go and everything I do, I am always thinking of new ways to solve the problems I see in everyday life. Most will not be worth looking into, some will be worth implementing personally, and still fewer will be worth taking more seriously.

Where would you like to be in ten years?
I probably need another five years before I could answer that. I am still a junior designer. I have a lot to learn and I’m not sure where my specialization will be. I really like the aesthetic and styling of furniture design, but also the technical nature of product and transportation design also appeals to me.  For now, I would like to see Longreach a success.

What invention do you wish you had though of?
Nacelles on jet engines and air intakes on supercars are some of the greatest examples of form following function and that is the heart of design.

What is your dream job?
I want to change the world – that is what every designer should seek to do. I am not talking about designing an iPod or literally changing a market. It could be something as simple as changing the way a product is made, so that it is cheaper or greener, or better.