In a special tribute to British design, product design students from the Royal College of Art have been asked to create work that incorporates Fendi’s signature craft techniques along with discarded materials.

Under the guidance of British designer Simon Hasan, who has previously collaborated with Fendi on several design initiatives, the project will also mark the opening of its new London store on Sloane Street.

The designs include kinetic craft machines; a blank canvas that will slowly evolve into a colourful, decorative picture and a series of objects that combine the skill of cutting leather to create objects that are both traditional and progressive.

On the opening night, the students will create a site-specific design installation, showcasing the creative processes that led them through their projects. 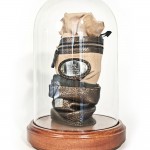 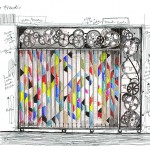 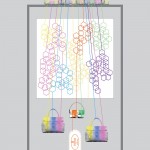 Lely’s inspiration came from the Italian art movement Futurism, particularly the distinctive fragmentation and influence of machines in the artwork of the Futurists.

Her playful and interactive kinetic machine incorporates a system of cogs and pulleys, scrap metal parts and lengths of Fendi leather off-cuts.

The result is a piece that is continually changing; a mechanism that celebrates the art of craft, the motion of industry, progress and the future, whilst respectfully acknowledging the past.

Probst’s window display starts out as a white blank canvas with Fendi bags hanging from the bottom. Drips of coloured dye are slowly released down the canvas to transform the leather bag’s natural beauty, resulting in a decorative and ever-changing picture.

Fendi’s products are partially concealed and silhouetted within blown glass vessels that have a leathery, skin-like texture. A spy hole reveals a glimpse of the treasures that lay within.

This is a collection of colourful studies into the detailing that make the Fendi Selleria bag unique.

Wallenberg and Karelson are creating a chemistry lab installation that highlights the colourful dyes used to create Fendi bags. The dyes will also make-up a spectacular flower display within the store.

Thorne had experiments with metals will create beautiful, textured objects that will adorn the new store.

Weller and van der Haak have deconstructed the bag to reveal hidden components such as zips and rope and are displaying these sculptural objects in Victorian glass bell jars.

Inspired by Fendi craftsmanship, a series of objects that combine the skill of cutting leather with CNC carving, to create objects that are both traditional and progressive.

Matched layers of leather and wood veneer produce blocks of merged materials. The blocks are shaped using 3D computer software and CNC cutting to reveal a new pattern, made by the intersection of the two materials, suggesting the look of upholstery achieved with an entirely new process.

The display will be unveiled on 17 September to coincide with the start of the 2011 London Design Festival and will remain there until 25 September. Read our report on emerging designers at the 2010 LDF.