A composer and architect are creating urban ‘soundscapes’ around Lower Manhattan to explore the relationship between space and sound.

Organized by the Guggenheim Museum, To a Great City is the second edition of stillspotting nyc, a two-year multidisciplinary project that explores the relationship between space and silence within the crowded urban environment. 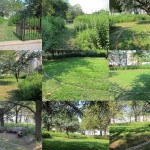 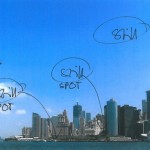 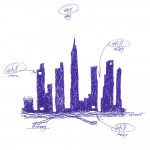 Here Estonian composer Arvo Pärt has described his music as a frame for silence and uses reduction of sound rather than augmentation to create his compositions.

His concept of tintinnabuli – ‘little bells’ in Latin – which forms the basis of most of his work, was born from his vision for an extremely nuanced aural environment that could not be measured, so to speak, in kilometers or meters but only in millimeters. His pieces often revolve around a central tone that reappears consistently throughout the work.

Norwegian architect Snøhetta has selected — and in some cases subtly altered — urban spaces that embody the concept of a central tone and extend the perception of sound into the realm of space.

Visitors will experience this confluence of music and architecture at five separate locations downtown that quietly celebrate the city, ten years after the September 11 attacks.

Travelling through sites along the periphery of Ground Zero, participants may encounter a green labyrinth created by The Battery Conservancy, reflect in an underground chamber at Governors Island National Monument, and enter otherwise inaccessible spaces in landmark skyscrapers.

The stillness and seclusion of these spaces heightens awareness and recalibrates one’s senses. Over the course of a day, participants may visit each space multiple times at their leisure to understand how their perception changes based on circumstances such as time, stress, appetite, and sleep. Listeners become increasingly sensitised as they are drawn in and ideally will be transformed to a focused and still state.

We caught up with David van der Leer, assistant curator, Architecture and Urban Studies at Solomon R. Guggenheim Museum to find out more about this intriguing project

Design Talks You talk about exploring the relationship between space and silence can you be more specific about what this actually entails?

David van der Leer I often tend to think that NYC is such an anxious place as a result of the relentless grid that we live in. But can our urban fabric also be the basis for beautiful quiet moment. Stillspotting is helping people to notice these moments more in their everyday life.

DT How different are the various New York boroughs in terms of locating these and your approach to then transforming them?

DvdL Very different. Not only do you run into different social challenges wherever you go, the spatial possibilities are very diverse in the boroughs. In Brooklyn we were interested in an empty warehouse space, which we found in Downtown Brooklyn. In Manhattan we wanted to be circling around Ground Zero and help people see the Financial District in a more poetic way.

DT How different have the approaches and contributions been from the various people involves: artists, composers, architects?

DvdL Each of the participants brings something different to the table. The first edition was created by artist Pedro Reyes who developed a sanatorium that was very much about social interaction. The second edition by Part and Snohetta will be much more experiential and focus on the relationship between sound and space: and how this may shape the perception of the city.

DT Is this a project that you intend to expand to different urban environments outside of the US?

DvdL We are first exploring the different possibilities in New York City: and really treat it as a global project. However I can imagine it may be interesting to take this project on the road and also look at the issues around stillness and noise in other cities around the world: so yes: who knows.

To a Great City, the Manhattan edition of stillspotting nyc, will be open to the public for two extended weekends on September 15–18 and 22–25, 2011 at the Guggenheim Museum, New York, US.