Designersblock this year moved to the Farmiloe building on St John Street in Clerkenwell for more space to curate the show as part of the London Design Festival. From the outside, large white inflatable spheres and upside down furniture suspended from the rafters gave the warehouses the appearance of an inverted mad hatters tea party, but inside the designs were more down to earth.

John Galvin‘s handcrafted furniture is warm and tactile. His collection includes industral looking floor lamps fashioned out of solid pieces of wood, with suspended lightbulbs and brass turnscrews as dimmer switches – and a sideboard of solid wood and white gloss lacquer, with finely oiled drawers that open and close effortlessly. 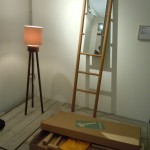 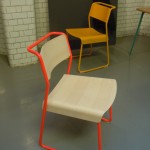 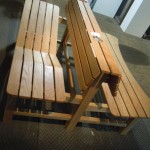 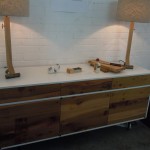 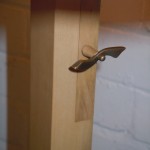 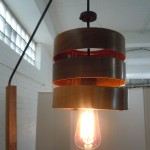 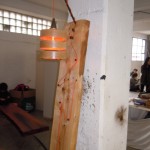 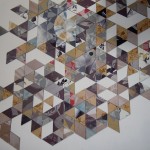 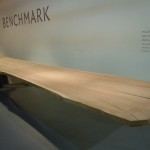 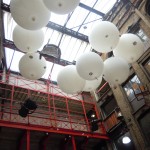 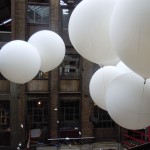 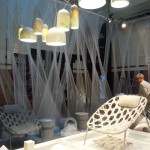 Many prototypes were on display, such as Lucie Libotte’s interactive magnet Splintering Crockery wallpaper. A textile designer by trade, Libitte has combined weave, print and laser cutting to create pieces that form an ever rearranging mosaic on any given surface, with a lick of magnetic paint.

Furniture and product designer Minsung Lee‘s A-symetrical back-to-back bench has been designed for public spaces to encourage conversation and interaction – over sitting in a straight line, feeding ducks.

At Tent, in the Truman Brewery on Brick Lane, there was a healthy mix of bold designs, business cards transactions, and speculative interest.

One of the exhibitors taking their first trade show stand following Young Designers earlier in the year was Tamasine Osher, whose limited edition coffee table mixes Cedar wood and copper piping to create a piece of domestic carpentry sculpture. Her wall mounted bicycle rack and storage in walnut wood, displayed in partnership with Tokyo Bike Company, makes a smart crossover between functionality and design.

A new edition to LDF was DesignJunction, which launched in at the Milan fair this year and came to Victoria House Basement, off Bloomsbury Square; a well curated space with high-end compemparay interior brands.

The showstopper piece was by Benchmark, an 11.4-metre table called Tree, made from a single plank of oak, supported at the centre by a polished mirror stainless steel pyramid – a piece of structural engineering that appeared more fit for a bridge than a piece of furniture. The claim it could support four adults standing on one end was duly tested and validated on the opening night.

In terms of desirable domestic furniture, Another Country a Dorset based firm making contemporary craft furniture presented a sturdy range of indoor benches and tables that mix ash, walnut and copper. To round off the collection, it also showed a collection of updated terracotta pottery, Made in Hackney, along with day beds and benches upholstered in 100% organic cushions.

More contract-based brands also exhibited, such as VG&P (the company of design duo Ed Carpenter and André Klauser) who showed their powder coated steel and plywood Canteen Utility Chair (originally designed for the Canteen chain of restaurants in London) in a range of near-on neon colours.

Across East London and Bloomsbury there seemed to be a strong vein of contemporary solid wood investment furniture. There was also a preoccaption with designing furntiure without screws.

New designer BeBenny, for instance, presented high-end flat back furniture that you assemble with just a mallot at Tent. There was an adjustable desk lamp held together only with very strong magnets – the only holdback being that paperclips fly towards it – exhibited at Designersblock. And finally a bench by Another Country at DesignJuncton can be assembled and secured using just a twopence coin – flatpack deluxe!

The London Design Festival ran from 17-25 September 2011 at various venues around the city. Read about the other events at LDF2011 at its hub at the V&A and on emerging designers at the RCA.