Sometimes it is a question of good timing. In the case of Henrik Fisker it was a combination of this and possibly knowing the right people that won him substantial financial backing to set up his independent green car company Fisker Automotive in 2007.

Born in Denmark, Fisker on graduation joined BMW’s advanced design studio in Munich becoming president of the firm’s Californian studio DesignworksUSA. From there he went on to Ford to become design director at Aston Martin and later Ingeni, Ford’s London-based creative centre – a job he gave up to start his own luxury car company. And the gamble seems to have paid off.

So far his Californian company has produced its first car Karma at the Delaware factory , with the second Surf, an estate derivative, on its way and a smaller car called Nina promised for 2013. We caught up with Fisker in London to discuss Fisker design, clean mobility and ‘responsible luxury’. 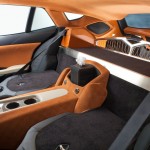 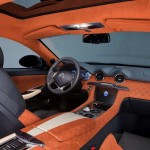 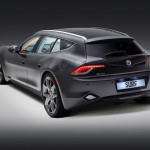 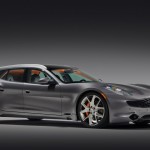 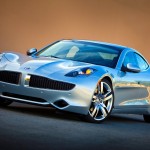 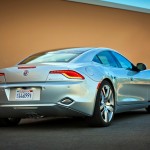 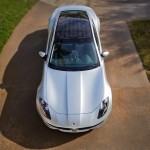 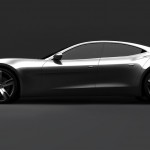 Design Talks. You had a comfortable life working at Ford. What made you decide on starting your own green automotive company?

Henrik Fisker. I couldn’t imagine a world without cars. But then in 2006 when I saw Leonardo DiCaprio
go to the Oscars in a Toyota Prius I knew the world was changing. Either I could sit back and watch the world drive in their G-Wiz and Prius cars or create an alternative solution. I thought why do hybrid electric cars have to be so small, ugly and boring – why not create beautiful environmentally friendly cars.

From the start we knew we wanted to be environmentally conscious not only with our cars but in our production facilities and dealerships and this led to creating an environmentally friendly car company.

DT. Could you tell us of some of the examples of eco-initiatives?

HF. We got all our dealerships to get solar signs. The wood in the car is from the woods left from the Californian fires. Then off course we have the solar roof on the cars.

We had an Indian client who wanted to know if it is possible to have an animal free luxury car, which gave us the idea of making the top-of-the-line eco-chic with animal free interior.

DT. How would you define Fisker?

HF. For us it is almost about creating a lifestyle around us – if you buy a Fisker car it is about joining a certain lifestyle. It is about responsible luxury showing that you care but still want a beautiful car and a fast one.

DT. Does this mean the cars are highly personalised?

HF. No, we didn’t want to go down the Aston Martin route because we would end up making very expensive cars that nobody would buy. This would defeat our mission. These cars will sit in the garage and be driven a little whereas the problem comes from pollution caused when stuck in city traffic. So the Karma is a premium car but in a segment where you sell a reasonable number of vehicles. It is the same size and priced as the Porsche Panamera and sits in this class that also includes the Mercedes S-Class.

DT. How would you describe Fisker’s design DNA?

HF. It is about sporty, dramatic looking cars that stand out from the crowd and don’t blend in. It is about proportion – long wheelbase but also very sculptural. I think of what made me fall in love with cars – cars from the 50s and 60s, the Jaguar E-Type. So for me it was about giving a lot of real estate to the sculpture.

Then the DNA is about looking into harmonious graphics where every line has a purpose – we don’t let any line go on the car by default from engineering. We are a design-led company. All cars now start with engineering, but we start from an idea for a design and work closely with engineering, but they are there to solve the design not the other way around.

DT. Do you feel your Danish routes have impacted on the design?

HF. There is not a lot of clutter inside just like an iPad – very modern and clean which could come from my Danish background as we have very clean furniture design – timeless design. So yes a little Danish history of design has gone into the car with a pure exterior and interior design that is timeless. For me cars need to be timeless or get better with time like Danish design.

DT. How would you describe your customer profile?

HF. The customers so far are real car enthusiasts. They love the design. Today car technology has become so complicated that it alienates the general population. We’re appealing very much to the design enthusiast.

We also have a lot of women buyers. I’ve personally spoken to a lot of women who have bought the car and they come from two directions. For them it is about the design and the environment.

DT. Do you believe clean car design should have its own language?

HF. I think the difference comes from opportunities the new drivetrain [engine] allows you to do. But I don’t believe in creating weird design for the sake of being weird. We have followed to a certain degree the function of the vehicle – although I don’t like to say form follows function, as this is too vague. It took extra time to do this.

DT. It is also interesting how you’ve created a special electric engine note as this is an ongoing discussion when it comes to electric cars.

HF. Yes it is a big discussion. I wonder if the first people who were used to parking a horse carriage and were confronted by a noisy engine thought this is so cool! It took generations to love it. Our inspiration is from the electric motor but we try to work it by using some Hollywood film people and from films like [Disney’s] Tron or Batman Returns that have futuristic vehicles that have more of a techno sound.

Originally the engine sound was created to warn pedestrians, then it became emotional and exciting. We won’t want people to download their own sound like on their phones as the car will lose its character and we don’t want to create noise pollution. We’ll have variations for people who like a sportier noise for their engine.

DT. What can you tell us about your next car Nina?

HF. The next car Nina will be smaller and priced at half the price of the Karma and eventually we will make one even cheaper. It will be in the same family as the Audi A6, Mercedes C-Class but will look dramatically different.

Karma will be our top end car. We took the approach of Apple – the first iPhone that came out was the most expensive on the market and off course as the technology evolves it became cheaper and cheaper. Car companies tend to take the opposite approach.

We had to show the Karma quite early on in the project as we were raising quite a lot of money for our project. The Nina has been signed off and production is due in 2013.

DT. What are your sale forecasts?

HF. With the Karma we’re hoping to sell 50,000 cars a year and Nina 100,000 cars a year. Our biggest sales will be in the US and Europe, both around 40%, but we are going to sell in China as well as India and then Brazil. The Karma is only left hand drive but Nina will be right and left hand.

DT. Have you considered a city car?

HF. It is too early to talk about this but you can see that we are progressing towards a small car eventually.

DT. In Denmark you don’t exhibit luxury but in the US, where you live, wealth is somewhat flaunted. How have you married these two very different cultures?

HF. It is a combination of the two. On the one hand the exterior says you’ve made it but the interior is low key. Leonardo made the Prius cool by driving it to the Oscars – he led that revolution. He is very interested in environmentally friendly cars and came out to see the Karma and loved it.

DT. Do you see attitudes changing in terms of eco-responsibility?

HF. Attitudes in America have changed too and overnight they went from loving the Hummer to hating it. Attitudes there are like Europe now.

There are a lot of people now who are thinking of adapting a different lifestyle – and this is what I mean when I say responsible luxury. Everyone sees your car and it is a statement. Luxury for me is two things – on the one hand it is what it does for you and, on the other is the recognition and admiration from the outside. With the Karma this is where we think we work.