‘Exhibition design,’ says Andrew Groarke, one of the duo behind architecture firm Carmody Groarke, ‘is about a memorable visitor experience.’  He should know having recently designed the Frieze Art‘s pavilion in London.

Erected in Regent’s Park, the temporary giant tent houses one of the capital city’s largest yearly art fairs. Yet instead of designing a simple protective cover, Carmody Groarke chose to manipulate the setting, the park’s trees emerging here and there in the midst of the exhibition space so that at all times the visitor would be aware of his location. This Frieze the tent itself became as engaging as the very valuable art it contained inside. 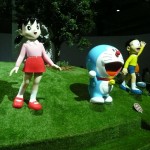 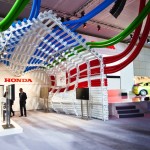 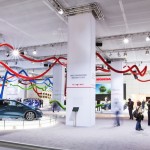 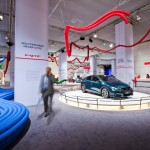 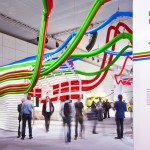 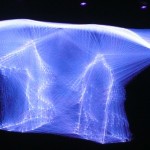 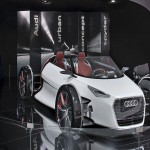 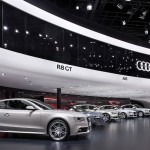 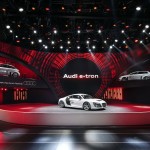 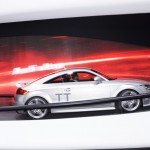 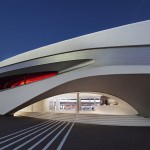 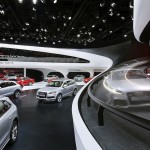 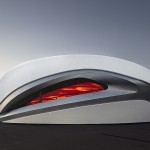 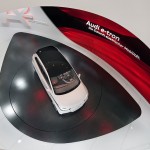 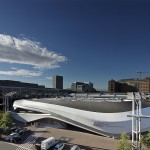 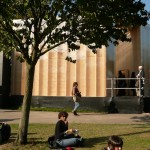 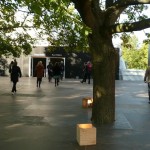 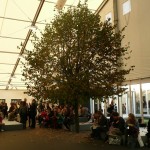 The growing importance of pavilion design is no surprise. Exhibition design in the context of the car industry, however, is still a fresh adventure although this is about to change.

At the recent Frankfurt Motor Show some carmaker expressed an astute understanding of the power of communication through exhibition design. They used this medium to showcase not just their latest concept and production cars, but specifically highlight their commitment to sustainability, and hint at lateral thinking for future mobility. The various pavilion designs revealed much about their identities.

German marque Audi’s pavilion was altogether a highly visceral approach – designed to seduce the viewer. The work of Stuttgart architect Schmidt Huber and Partner, the stand-alone building, erected outside the main halls, took a year to plan and only eight weeks to construct.

‘We didn’t want to just design an interior but have the same speech on the outside,’ says Bernhard Neumann, head of Audi events marketing. ‘The design represents what our brand stands for: dynamic, sophistication, very modern and very horizontal.’

The 7,000 sq m building borrows its formal expression from Audi car design meaning it is highly polished using clean and simple lines with splashes of LED lighting as decoration. It cocoons the 400-meter racetrack that forms an integral part of the building and can be glimpsed from an opening on the outside.

The track idea came first with the building, as Neumann explains, almost covering it. The nine cars that drove visitors at the show in so called ‘taxi rides’ represented the various branches of Audi’s activities that include sustainability, connectivity and lightweight.

‘As a visitor you have the chance to drive with our experts so that guests become part of the instillation,’ he says, adding enthusiastically: ‘It is fun like a rollercoaster as it goes on two levels and gets very tight in sections.’

Rival marque BMW took a rather more sober approach. The pavilion proposed a set narrative asking the viewer to piece the marque’s activities in a linear fashion.

The architecture and scenic staging was the work of Berlin firm Blue Scope that specialises in temporary architecture and creative staging. Sustainability was a key factor both in terms of recycling and re-usability and the design team were able to re-use over half of the material from the previous BMW pavilion.

The versatile stand was able to stage numerous events leading up to the main show including the i3 and i8 electric concept unveil as well as hold 250 live shows on public days alone.

All this whilst keeping the focus on the main presentations in a 8,000 sq m space that accommodated 60 cars on static display, and 30 cars introduced whilst driving on the 300m track.

The majority of other carmakers stayed close to a more traditional exhibition design vernacular that generally entails cluttered stands adorned with shinny metal and slinky models.

Japanese marque Honda, however, took an entirely different approach by adding an element of fun and playfulness to its pavilion design. The creative work of Tom Seymour and David Bruno of London-based Wieden + Kennedy, the design follows the theme of ‘many roads to zero emissions’ – a sort of extension to the company’s powerful advertising campaign of recent years that concentrates on projecting above all an ecological message.

The duo commissioned Belgian designer Sebastien Wierinck to create his trademark flexible, polyethylene tubes manipulated to create various environments and seating areas all of which connected to ‘the dream house’ – a symbolic hub for Honda’s future vision in terms of technology and sustainability.

The stand was divided into sections: hydrogen, electric, hybrid, petrol and diesel with each technology colour-coded to be playful and light, and help viewers understand the complex technology easily. ‘We wanted to talk about Honda’s technology in a simple way and used the coloured tubes to help tell the story,’ explain Seymour.

Green represents electrification, red clean petrol engine technology and blue hydrogen power. ‘So when the green and the red tubes come together it represents the coming together of petrol and electric engines to create hybrid energy,’ enthuses Seymour, adding: ‘Since hydrogen only omits water we decided to link this to the exhaust tube of the car to show this technology visually. It was all about visualising the technology in the most simple of ways.’

Pavilion design is ultimately about the visitor experience and it therefore needs to be explicit in intent without much explanation. Perhaps some of these efforts may tease other carmakers, in particular the Italians who seem stuck in a strangely tired and old fashioned mould, to leave the comforts of traditional car show design. Competition is high in all industries and putting on a good show, simply, is really what it’s all about.