Deborah Turbeville has for many years been a great source of inspiration for my work and collections.  Our design studio walls at GharaniStrok were plastered with inspirational images of which Turbeville held a strong presence.

They included The Bathhouse (1975) – one of my favourites – as well as Nova (Clevedon, London 1973) and Charlotte Gainsbourg, shot in an image reminiscent of a turn of the century Chaplinesque heroine. 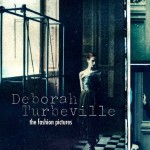 Turbeville, whose work first appeared in Vogue in the mid-70s, went on to become one of the most influential figures in contemporary fashion photography. She has continued to produce fashion stories that seek to blur the boundaries between commercial fashion and fine art photography.

There is a collection that can be designed from each of her shoots – the mood, the scene, a story like a collection.  I love the rough backdrops and distressed grey tones concrete and barren. They are cold in an alluring enigmatic poetical way. The rejected wedding gowns of princess Diana in 1980, for instance, conjure up such a ghostly sad feeling.

Turbeville has a unique style that is so raw, moody, sexy, grainy, and sophisticated that invites and intrigues. Each picture could be a frame of a movie or an illustration. The backdrop, lighting and dark eeriness captures its audience like no other.

She has the power to draw you into her weird yet wonderful world capturing a moment in time that cannot be placed as old or new – instead they are simply timeless.

She wrote of her own work: ‘Perhaps the most interesting thing about my photographs is that they are a little bit of an enigma; they are hard to place.’

Deborah Turbeville: The Fashion Pictures is the first book devoted solely to her work. It includes a comprehensive collection of photographs including The Bathhouse series for American Vogue, and the psychologically charged Woman in the Woods series of 1977 for Italian Vogue, along with numerous fashion shoots for Karl Lagerfeld, Comme des Garçons, and other designers.