How do you define and redefine ‘walled cities’ within the metropolis setting? From physical historical defences to more liminal social boundaries, corporate estates or legislative territories, the impact of these structures is increasingly prevalent.

With this theme in mind, architecture students at London’s Royal College of Art have proposed a series of existing walled cities, in the process generating their own critical approach. 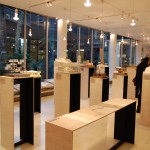 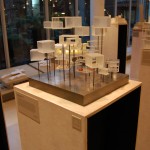 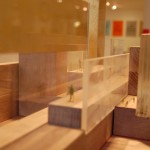 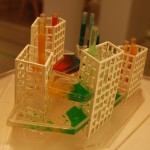 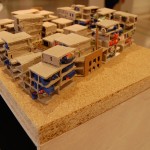 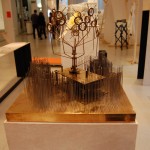 These include a factory in London’s former industrial hub Deptford Creek that literally turns discarded cotton rags to riches. The proposal by final year student Ben Williams sees discarded clothes recycled as cotton-fibre pulp to make banknote paper on which a new London pound can be printed.

The site he has in mind still benefits from essential qualities needed for efficient production. It is re-industrialised, says the architect, to make people think about the relative value of consumer goods and show the importance of our environment.

‘My model tests ideas of trapped space within inner sanctums, outer sanctums and public spaces: what we see and what is hidden,’ says Williams.

Another project set in Deptford looks at finding a community to support people working from home in marginal London sites. Richard Brown’s proposal provides shared leases for these communities to run and share work hubs communally, in turn provide training and opportunities for the neighbourhood.

Satoru Nakanishi would like to replace the outgoing Design Museum in London’s Shad Thames with the best public pool open to all. ‘As the site’s old public function relocates to West London, the new one becomes a social leveller, indemnifying this important residential community from becoming gentrified,’ he says.

Another student challenges the isolation that exists between the young and elderly population in the capital city. Specifically, it questions how the process of dying is confronted and accepted as a part of society.

‘It proposes that our perception of age and death must adapt in order to accommodate an evolving typology of elderly care, which includes the non-residential hospice and, crucially, the assisted-suicide clinic,’ explains its designer Tom Gibson.

Benjamin Kee works on a similar theme confronting what he calls the ‘horizontal inequality as an invisible wall in the city’. Here the project combines a home for disadvantaged and orphaned children with a skills centre that provides a live-in vocational training centre.

Patrick Herlod ?feels the city’s transport infrastructure will never physically develop at the same speed as this erratic metropolis. He challenges the role of transportation to slow down and stop users in this hectic environment – his ‘airhub’ proposition reconfigures the perception of the city and the infrastructure system.

An interesting proposal by Arisa Ishibashi explores the territories created by embassies that essentially create walled cities within the public realm. It suggests grouping embassies within interactive boundaries that will ‘catalyse foreign policy towards positive and negative conflicts,’ she says.

Jasmin Dieterle’s project redefines the consequential effect of conviction and internment as a social and physical wall within the city. She blames the lack of liberal public space, and an urban environment characterised by rules and restrictions for crime and chaos.

‘The urban architecture proposed is an alternative approach to imprisonment by playing with the relationship of inmate and citizen, of openness and enclosure, of hiding away and being exposed,’ says Dieterle.

Located in the heart of Nine Elms, the site is framed by the high security precautions of the American Embassy and the other adjacent building – these ‘natural’ boundaries make the existence of a physical wall almost obsolete.

These are just some of the many ideas proposed by final year post-graduate architecture students at the college. For more visit the RCA.