There is something quite enchanting, and perhaps a little sad, about a structure designed by some of the leading creative minds of our time that is commissioned to be temporary, there only for a brief few months. This has been the premise behind the Serpentine Gallery Pavilions, which sees buildings erected in the heart of London, in Kensington Gardens, each year from June through to October by leading names in the world of architecture: Zaha Hadid, Daniel Libeskind, Oscar Niemeyer, Rem Koolhaas, Frank Gehry and Jean Nouvel to name a few.

The 12th pavilion is the work of Swiss duo Herzog & de Meuron and Chinese contemporary artist/activist Ai Weiwei. This is a unique proposition that takes the visitor on an intriguing journey, beneath the Serpentine’s lawn to explore the hidden history of past pavilions. The eleven columns characterising each past pavilion, and a twelfth one representing the current structure, support a floating platform roof 1.4m above ground. 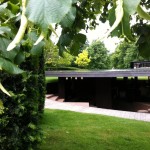 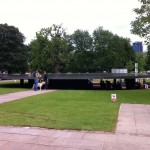 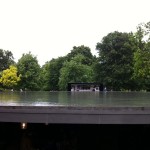 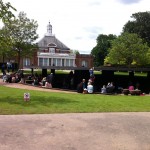 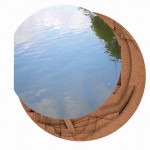 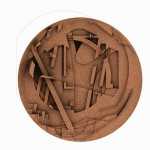 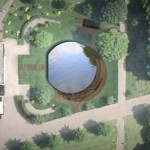 ‘So many pavilions in so many different shapes and out of so many different materials have been conceived and built that we tried instinctively to sidestep the unavoidable problem of creating an object, a concrete shape,’ explain Herzog & de Meuron and Ai.

The interior is clad in cork, a sustainable material chosen for its unique qualities that also echoes the excavated earth, and silence of peace as well as leave quite a strong musty smell. The team dug five feet down into the soil of the park until they reached the groundwater where they created a waterhole to collect the city’s rain that falls in the area of the pavilion. As they went deeper and deeper, they discovered a diversity of constructed realities such as telephone cables and former foundations.

‘Like a team of archaeologists, we identify these physical fragments as remains of the eleven pavilions,’ they said before the building was unveiled. ‘Their shape varies: circular, long and narrow, dots and also large, constructed hollows that have been filled in.’

The design aims to inspire visitors to look beneath the surface of the park as well as back in time across the ghosts of the earlier structures. It is more reconstruction, of course, than excavation, but nevertheless it works in creating a fun theatrical space to be enjoyed by the general public throughout the summer months.

This is the second time Herzog & de Meuron and Ai have collaborated having designed the Beijing National Stadium for the 2008 Olympic Games.