This is the new Serpentine Sackler Gallery, designed by Zaha Hadid Architects. Buried in London’s Hyde Park, in Kensington Gardens, the building breaths new life into The Magazine, a former 1805 gunpowder store. It is also a short walking distance from its parent space, the Serpentine Gallery.

The Magazine was a quite neoclassical building. It used to blend in with the park’s wildlife. I cannot recall having paid much attention to it on my many walks through the park – that is until now. Hadid’s signature bold, curvaceous design (she is often refereed to as the ‘mistress of the curve’) begs to be noticed. The wave like white structure bursts out of the western side of the unassuming gunpowder building, forming the roof that houses the café, restaurant and social space whilst the main building exhibits art.

The inaugural exhibition is a site-specific installation by Adrián Villar Rojas. Here the young Argentinean artist has tested the limits of clay to create an apparently fossilised world of ruins and ancient monuments that play with the concept of time, history, modernity and the future – much like Hadid’s building. It is an intriguing exhibition, and definitely worth visiting. 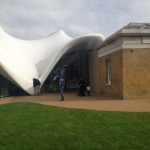 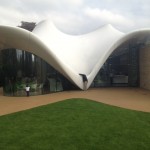 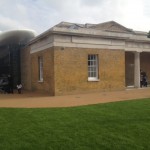 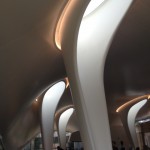 The Serpentine itself may be small in size, yet it has become the sixth most visited public art institutions in the capital, championing new ideas in contemporary arts since it opened in 1970. Together with the Serpentine Pavilion projects, and now Sackler they have transformed this glorious and quite park into a live, and free exhibition space. This is proper public art.