Writer and photographer Jason Oddy examine the relationship between man and the built environment in his latest series ‘Concrete Spring’, exploring the Algerian work of pioneering Brazilian architect Oscar Niemeyer.

When Niemeyer first visited Algeria 40 years ago, he encountered an optimistic country. Following the struggle for independence from France, the socialist president Houari Boumedienne was keen for Algeria to transform itself into a modern nation. So he asked Niemeyer to design two ambitious university campuses – the University of Mentouri, Constantine and the University of Science and Technology Houari Boumedienne. The architect was also commissioned to create ‘la Coupole’, a stand-alone Olympic sports hall – all of which was conceived and built between 1969 and 1975. 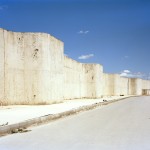 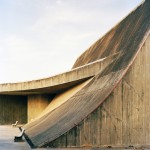 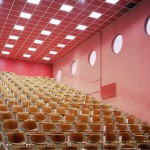 Oddy spent three weeks with his 5 x 4 field camera exploring these buildings in June 2013. His photographs not only document these modernist monuments, but also ask how these buildings, designed to empower Algeria’s postcolonial generation, might be relevant today.

Following 40 years of political stagnation, crushed hopes, and a 15-year civil war, it is hard to imagine the optimistic country Niemeyer encountered in 1969. However, given the political upheaval in the region, the exhibition’s timing couldn’t be more relevant.