Japanese carmaker Lexus sponsored three international designers to interpret the theme Amazing in Motion at Salone del Mobile (8-13 April) this year. The impressive exhibition took place in the bohemian Brera Quarter, home to the Accademia delle Belle Arti, and away from the main crowded Salone at Fiera Milano.

Here Nao Tamura’s Interconnection looks back at the 2011 Japanese tsunami. The designer relies on natural motion to study our relationship with nature. The floating purple petal-like discs hang from the ceiling on thin threads, individually swaying to the natural flow of air as visitors pass by. The impact has an almost ethereal quality.

Tangible Media Group’s Transform explores the link between design and technology. The US design team worked closely with professor Hiroshi Ishii from MIT Media Lab to interpret the car’s hybrid drive where kinetic energy from braking is captured to charge the battery. Here sensors capture the energy from our movement to shift a thousand pins up and down in an almost surreal wave-like motion. Professor Ishii added extra theatre on the opening day by playing conductor to this orchestra.

We Dance by Fabio Novembre employs ‘technology to express the movement of this dance,’ says the Italian designer. Here he presents a mirrored sphere – almost like a giant disco ball – that is surrounded by shards of pointed glass and is cocooning an entity that represents the beginning of life, and ‘draws a direct connection to the cosmic motion of planets and galaxies’ says Novembre. 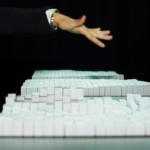 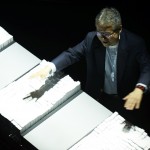 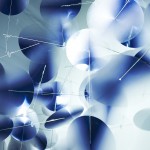 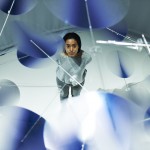 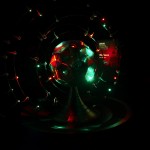 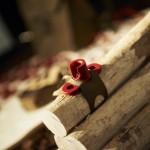 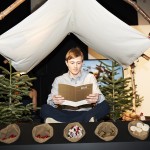 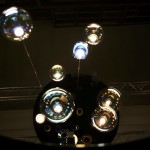 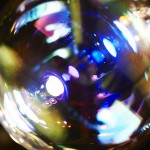 The carmaker also featured work by the 12 winners of the Lexus Design Awards in Milan. The international competition, now in its second year, is aimed at emerging designers. Two contrasting visions were made into physical concepts for the show. Answering to the theme of curiosity, and inspired by childhood, Sebastian Scherer‘s hand blown glass bubbles Iris have a magical quality, whilst James Fox has taken a more practical and rustic view with his Macian concept.

Mentored by games creator Robin Hunicke, the German designer was after creating ‘lightness and play’ for Iris. The bubbles here are individually hand blown, mimicking the concept of children’s playing bubbles, so that each has a unique shape and an individual colour that transforms with changing light. The end result is a magical installation that really does ‘capture a moment in time, so fleeting, so unexpected’ as described by its creators.

Fox’s Macian concept works on the idea of foraging, in this case for materials. Working with mentor Arthur Huang, a sustainability expert and director of Miniwiz, the British 3D designer has literally created a den-building kit. The idea is ‘to encourage children to get in touch with nature, to encourage curiosity by engaging with the environment,’ he says. The Macian is a set of tools, neatly packed in a backpack that can ensemble a den in any wooded area. There is even a guide to help inspire a variety of designs. All you need are a few wooden rods and his tough plastic parts can create a durable skeleton to attach the rainproof canvas top.

Elsewhere runners up architect and designer Mami Kim from Mamikim & Co partnered with fine artist Joe Hardy to create Piximot, a digital construction that unveils the technology and science behind electronic gadgets – the idea is to engage future generation to connect with the object.

Read about other car brands at Salone del Mobile.