This week saw Clerkenwell Design Week gather international companies, individual designers, and emerging young artists in one of London’s oldest neighbourhoods creating a striking contrast between the local historic architecture and contemporary design. The three-day event, now in its fifth edition, sees some of Clerkenwell’s landmarks transforms into a large exhibition space.

You enter CDW through St John’s Gate, where this year the young design collaborative Russ + Henshaw worked with Turkishceramics to create Tile Mile, a site-specific installation that references Islamic art and architecture. The combination of the 7200 colourful ceramic tiles and mirrors, incorporated into the passageway beneath the 16th-century medieval arch, created quite a dazzling start to the show.

The fair’s hub was once again at the Farmiloe Building, which formed the backdrop to an installation by car marque and main sponsor Jaguar and light designer Foscarini. One of the fair’s highlights, the giant cascading structure features dozens of Foscarini’s Tuareg totemic LED lamps suspended from a crane attached to the dramatic atrium descending upon a Jaguar F-Type Coupé. The idea is to represent the sparks coming off from the back of this powerful sports car, and to express the lightness of the aluminium structure in both the car and the lights. 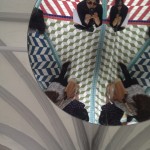 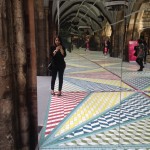 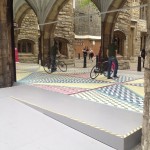 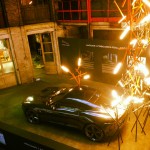 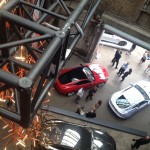 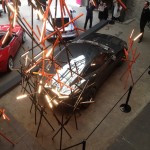 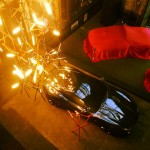 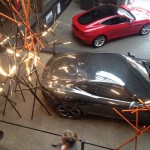 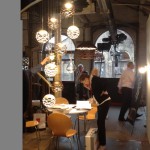 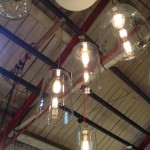 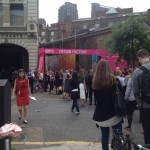 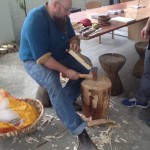 The imposing Victorian building also staged Design Factory showing work by international design studios including Artemide, Anglepoise, Folkform, Note Design Studio and Stellar Works. Here too there was a celebration of light, with some similar themes running through such as hooded hanging lamps and hand blown glass lights that celebrated the process of making.

Particularly notable were the light designs by French designer Marine Breynaert. Inspired by the contents she found in her grandfather’s old car garage, the former fashion designer utilises industrial screws and bolts for her new collection that she says is a marriage of ‘industrial heritage and a sense of contemporary poetry’.

CDW also saw a focus on design for usage rather than pure aesthetic value with tables, chairs and sofas that transform into various shapes for different functions. Additionally, craft was celebrated throughout the exhibition space. On the top floor of the Farmiloe Building, following a talk on the value of making in the age of digital printing, carpenter Barn The Spoon carved his way through a piece of log transforming it into a wonderful organic stool.

Elsewhere in the neighbourhood, The Order of St John hosted an exhibition of decorative designs; the House of Detention showed craft, and Crypt on the Green was dedicated to lifestyle objects. CDW also sees local studios open their doors to the public. This year Tailor my Tom Vac at Vitra dedicated the entire exhibition to industrial designer Ron Arad‘s chair with 23 architects and designers asked to re-interpret his iconic piece.

With the art and design festival season in full swing, it is pretty much impossible to keep up with all of the activities around the world. Each fair brings something unique to the table, and they each have their own regional charm. What they mostly do, though, is allow for a shared sense of creativity – even if just for a few days. This was particularly noticeable at CDW this year where established design studios rubbed shoulders with up-and-coming young artists and local crafts people. During these festival communities are created based on a shared interest in making our world a richer space through creativity.