It is a surprisingly steep climb to the top of the Cap Rocat. With full views of the bay of Palma de Mallorca it is well worth the climb though. Beneath my feet sits the piercing blue Mediterranean Sea to one side and Mallorca’s capital Palma to the other. I am surrounded by wildlife, too – a noticeboard outlines the number of rare birds to be sighted on the grounds of this most unusual hotel. This is a former military fortress – the stone structure is quite spectacular carved into the side of the island. The 25 rooms are large, with cold slabs of stone covering the floor and a hint of Moorish aesthetics, a remind of the island’s colourful history.

We’ve on the largest of the Balearic Islands to test the new Mini Hatch. This is the third impression of Sir Alec Issigonis 60s car under BMW ownership. Mini, perhaps more than any other car, gets opinions going, especially in the UK where the public feels they have some degree of ownership. They have been polarised ever since BMW bought the marque 14 years ago and gave it a new lease of life. Yet Mini is a phenomenal success – 2.4 million have been built and exported to 108 markets since. Its appeal owes very much to its ‘cool’ 60s persona – who can forget the exquisite chase in the Italian Job – as well as its ability to be a perfect car for our more sensible modern world.

This latest car retains the proportions of its ancestor whilst conforming to the tough safety regulations of today. This means it is larger than we would all like it to be yet the proportions are kept intact, as is the quintessentially Mini go-kart driving feel which is more balanced in this third-generation car. 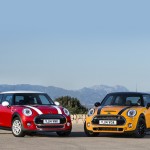 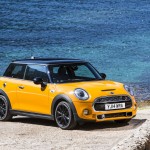 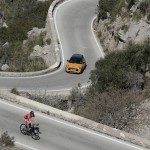 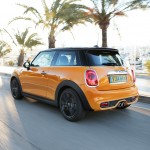 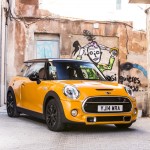 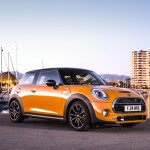 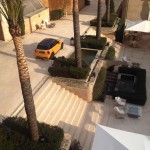 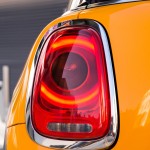 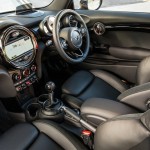 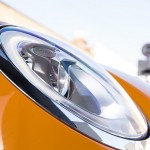 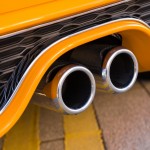 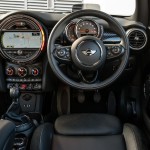 Mallorca offers a mix of coastal routes that are perfect for cruising, and more challenging mountain tracks that take us up and up the steep rocks that dominate the centre of the island. It is off-season and there are hardly any tourists about, bar groups of keen cyclists testing their climbing skills. They seem pretty fit ascending ever upwards the steep winding roads, as is our car, a manual 2-litre petrol that holds the road perfectly as we drive higher and higher, ears popping, to the peak.

The driving sensations are Mini staples: the low-set, straight-ahead driving position, the taut ride, and quick and sharp steering. Up in the mountains is a million miles away from Magaluf that has come to define this island. Here the air is fresh, the food distinctly local, and the locals clearly not interested in attracting mass tourism. Later we make our way to the party resort, now completely deserted and left shabby almost waiting for the oncoming summer carnage. For now though we enjoy the stunning natural beauty Mallorca has to offer. Our orange Mini fits well with the sharp Mediterranean colours and is admired by locals as we wiz through Palma.

There are certain cars where the design cannot be tampered with too much and Mini is one. Here even though the car has been entirely redesigned, the changes are subtle. The exterior, for instance, is now sharper, more sculptural with more defined lines that help shed visual weight so the car feels less cutesy even though it is actually taller, longer and wider by a few millimetres. The traditional design cues such as the hexagonal contour of the radiator grille, circular headlights, upright rear light clusters and black lower body edging have all been subtly reinterpreted here. The curvature on the bonnet is a direct reference to the original car where a sharp raised line intersected the bonnet.

Much of Mini’s success lies in the generous personalisation scheme on offer, which now comes with five extra new exterior colours. The roof and exterior mirror caps can be finished in a contrasting colour, and customers can opt for black or white bonnet stripes.

It is inside though that we notice a big leap. The vernacular remains unmistakably Mini design with bold circular dials, and playful motifs. Yet the cabin appears to be less cluttered now, less playful, and the materials used are of higher quality so it feels, smells, and sounds more BMW, more expensive. The layout too is more logical with the speedo placed in direct driver view above the steering column, and window functions are no longer positioned centrally, which though quirky, was a feature I’m told lost on some buyers.

The design may be steeped in history, but this is a highly digitally connected car. A new central LED display, the first of its kind, provides the driver with constant visual feedback. Lighting around the new central instrument also warns of current road situation and points the driver to carry out specific operational steps. Additionally, by changing the driving mode the unit lights up in green, orange or red to indicate eco driving, comfort or sports. Our only criticism would be that although technologically a great idea, the application feels a little gimmicky.

For Mini, interior design will play a large part in the future. Director of BMW Group design, Adrian Van Hooydonk, feels that the marque needs to create further differentiation between the models that now include the Hatch, Convertible, Coupé, Roadster, Clubman, Countryman and Paceman. ‘This wouldn’t mean the Countryman becomes sober, but there would be a different feel especially with the interior colour and trim treatment. Now that we share the new front-wheel drive platform with BMW,’ he explains, ‘there is no longer the pressure to expand. That gives MINI more space to consider its next step.’

Back at Cap Rocat we are greeted by the hotel manager Jan, a Canadian who came to Majorca by chance some 15 years earlier, became mesmerised by the island and settled in Palma. What attracted him, he says, is the international vibe. The 2014 Mini, notes Van Hooydonk, is a cosmopolitan car. ‘It is about urban flair and urban choice,’ he adds. With 108 countries driving the car, and many of the buyers simply not sharing the Mini design history, the marque has evolved to become an international one too.