Campari is closely linked to Milan. Come aperitivo time, when the bustling city settles to enjoy a drink or two in celebration of the start of the evening, the distinctive bright, red hue decorates almost every bar table in town. Milan is a true aficionada of its local product.

The love affair owes more to just the unique taste of this bitter spirit. It has to do with Davide Campari, the son of Gaspare the liquid’s inventor, and the man who made the company a global brand when he took over at the start of twentieth century. Davide had strong brand vision. He understood the power of design, of advertising, of collaborating with interesting, and at times radical and controversial artists, designers and filmmakers.

We are at the Campari headquarters researching for the book The Life Negroni – Campari being one of the three spirits (and the only one that rarely gets exchanged for a rival bitter) that makes up this archetypal Italian aperitif.

Situated at the very edge of Milan, the brick red façade of the original site is visible from the road. It is a little imposing in this quite suburban setting, certainly striking and a reminder of the architecture of the time it was built in early last century. This is all that remains of the old production site. This and the big, bold graphics spelt out in cast iron that read ‘D. CAMPARI’.

The new headquarters is the work of Swiss architect Mario Botta and the vast concrete construction that greets visitors continues the sense of modernist grandeur. One of the highlights here is Galleria Campari, created four years ago to celebrate the 150 anniversary of the company. It is a visual treat and a wonderful lesson in not only Campari history, but also the development of advertising and branding in the last century. 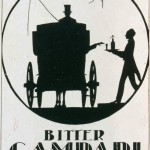 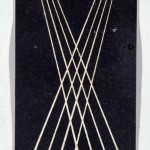 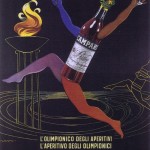 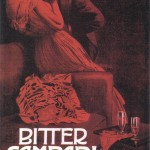 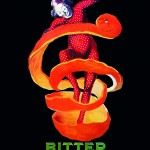 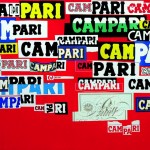 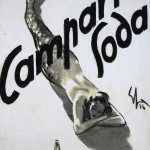 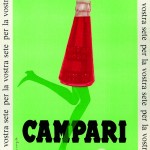 Gallery director Paolo Cavallo fills us with colourful tales of Davide’s ventures. We watch clips of promotional films made by the likes of Federico Fellini, see actors David Niven and Humphrey Bogart perform memorable campaigns – the latter a parody of Casablanca. The sheer volume of work is exhaustive.

Cavallo explains that ‘Davide was focused on what was happening in the world.’ He had an astute eye for the avant-garde working with Italian artist and chief designer for Olivetti Marcello Nizzoli, poster designer Leonetto Cappiello, illustrator Ugo Mochi, American graphic designer Milton Glaser, best known for the I ? NY logo… to name a few.

Up until the 30s, it was customary for artists to author their own type. Davide, realising growing competition from other spirit companies, stuck with a single logo for immediate brand recognition. In the 60’s Campari took on a new graphic approach, created by Leonardo Stroppa, Guido Crepax and Franz Marangolo. And in 1964 Bruno Munari produced the manifesto Declinazione grafica del nome Campari (Graphic Declination of the name Campari) for the opening of the first subway line of Milan. It caused a sensation.

Davide’s most notable association, though, was with the Italian Futurists, in particular Fortunato Depero, who created some of the most evocative work here. Amongst other strong beliefs, the movement challenged artistic hierarchy by dissolving barriers between fine and commercial art – and so working in advertising was encouraged.

Painter, sculptor, graphic designer and writer, Depero was arguably one of the brighter members of the Italian Futurists. His approach to the movement is documented in Depero Futurista, written in 1927 and sponsored by Davide. The book features a mechanical binding system with two bolts holding the pages together as a reflection of the Machine Age that characterises Futurism in the early 20s. There is a wealth of typographic inventions inside too– the text forms into various shapes, and different papers and colours are utilised throughout.

Depero’s ads for Campari were also experimental. By the 30s adverts had to be digested on the move, from buses, trains and automobiles. People no longer had the time to linger and ponder. Graphic design therefore had to be bold, be clean and the message at once understood. Depero not only opted for striking colours, he employed dynamic block letters, sometimes arranged diagonally. His black-and-white work celebrated the modern world and Manhattan skyscrapers.

Depero designed the mini bottle for Campari soda in early 30s, which remains in production almost to the exact shape, as well as lamps, trays and puppets – all of which are on permanent display here.

Today Campari continues this legacy, championing international designers, the likes of Matteo Thun, Tobias Rehberger and Markus Benesch, to name a few, as well as sponsoring new talent in the Art Label project.