‘We declare that the splendour of the world has been enriched by a new beauty: the beauty of speed,’ F. T. Marinetti wrote in the 1909 Futurist manifesto. ‘A racing automobile with its bonnet adorned with great tubes like serpents with explosive breath … a roaring motor car which seems to run on machine-gun fire…’

Speed. There is something at once modern, advanced, sexy, almost superhuman about it – notwithstanding its usurping by Mussolini’s fascist movement having taken the manifesto as theirs. Speed symbolises progress, and in the epoch of sustainability, it is perhaps not getting quite the glory it deserves. I can never forget the sheer thrill of taking the Shanghai Transrapid, the magnetic levitation train and the word’s fastest at 268 mph. Your heart almost stops a beat or two.

The Goodwood Festival of Speed (26-29 June) celebrates speed in its rawest form. The annual hill climb sees drivers race to complete an uphill course – and it is quite spectacular watching the parade of exotic metal, as RAF Red Arrows perform some stunning air acrobatics over the picturesque Goodwood House in West Sussex, UK. 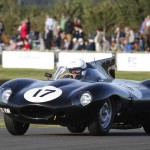 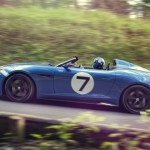 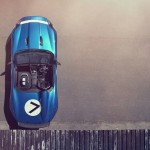 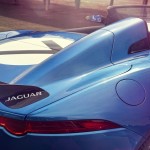 This was the ideal setting for Jaguar to reveal its latest production car, the F-type Project 7, a high-performance model and the production version of Project 7, a concept shown at Goodwood last year. Project 7 is a tribute to the Jaguar D-Type, which turns 60 this year. The racing car was produced between 1954 and 1957, featured an innovative highly aerodynamic monocoque construction and won the Le Mans 24-jour race on three occasions.

Project 7 will be made in limited numbers – only 250 have been promised so far. It has two seats, a simple removable fabric roof, and a distinctive asymmetrical hump at the rear. It has a lower windscreen than the F-Type on which it’s based and a carbon-fibre bodykit, which together with other innovative features, helps shed 80kg of weight. With 567bhp from a 5.0-litre supercharged V8 engine, Project 7 is the most powerful Jaguar road car.

It is the offspring of a newly created Special Vehicle Operations team. If it all sounds a little 007, then I suspect this was intentional. Half the charm of the brand is its association with all things British, the charming old school kind. The SVO team will be developing not only tuned versions of production models but also classic cars like the upcoming lightweight and super powerful special-edition E-type. And we cannot wait to put some of these to the test.

Read our Jaguar reviews here, and about Jaguar’s installation at Clerkenwell Design Week 2014.