Surfboards conjure up an exciting picture. Brilliant sun, vast blue seas, toned, tanned bodies… the sheer thrill, and of the course the danger, of riding the waves, of conquering the ocean. You cannot get much sexier. Like all good things in life, surfing too has become a victim of commercialisation, the surfboard  fighting to maintain its integrity. This is the premise of Surf Craft, Design and the Culture of Board Riding. Here author Richard Kenvin argues that the popularity of surfing has had a negative impact on this once handcrafted product.

Surfboards were traditionally made of wood and moulded by hand. The motifs, decorations, had cultural significance. That is until the 1960s when surfing became a multi-billion dollar industry when the boards became mass-production, no longer made of wood but synthetic and disposable materials. 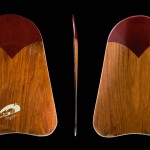 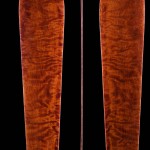 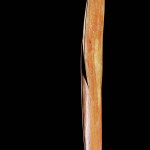 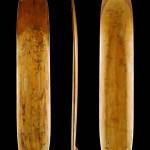 Surfboards became moving billboards for the surfer and sponsor. It almost erased the old ritual of craftsmanship it entailed and so they began losing their real value.

Surf Craft maps the evolution of the board, examining the history of its design and craft. From the ancient Hawaiian alaia, the traditional board of the common people, to the unadorned boards designed with mathematical precision, but also built by hand, by Bob Simmons, to the store-bought longboards popularised by the 1959 surf-exploitation movie Gidget.

Kenvin views surfboard design as an exemplary model of mingei, or art of the people, and the craft philosophy of Soetsu Yanagi. Yanagi believed that a design’s true beauty and purpose are revealed when it is put to its intended use. In its purest form, the craft of board building, along with the act of surfing itself, exemplifies mingei, he argues.

With straightforward vertical portrait photography by Ryan Field that treats the boards almost like framed painting and an engaging narrative, Surf Craft is an interesting read for even some of us who only dream of one day conquering the sea whilst gracefully balancing on preferably crafted wooden surfboards.

Surf Craft is published by MIT Press as part of  the Mingei International Museum, San Diego