Limbs twisting and twirling, awkward bodies of skinny flesh, taut muscles and angular bone, explicit poses… images that by definition should be sexual but are instead raw, expressive, at times angry and disturbing, yet striking and hypnotic.

Egon Schiele: The Radical Nude at the Courtauld Gallery is a terrific, tightly focused exhibition that reveals some of the most radical depictions of the human body created in modern times. It is also the first major museum exhibition of the Austrian artist in London in over 20 years. 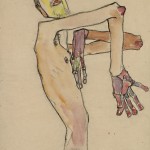 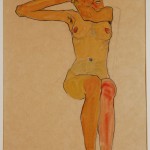 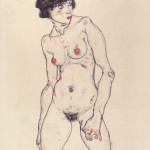 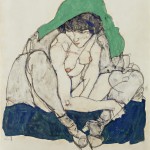 The 16-year-old Schiele arrived in Vienna in 1906 to train as an artist becoming a student of Gustav Klimt, the leader of Secessionist group of avant-garde artists and designers.

His early drawings shows a clear lineage with his mentor’s, but after 1910 the artist began to find his own language, drawing and painting the figure in an entirely new way with the nude as its focus.

The Courtauld exhibition charts the artist’s short career – Schiele died from Spanish influenza in 1918 at the age of 28 – of the works produced in Vienna during the turbulent years around the First World War.

‘His unflinching portrayal of the human figure distinguish these works as among his most significant contributions to the development of modern art,’ says Dr. Ernst Vegelin, head of the Courtauld.

On exhibit, many for the first time in the UK, are his powerful self-portraits, demonstrating how his approach was closely tied to his introspective examination of his psychological self.

Schiele drew an unusual variety of people including himself, his sister, lovers and wife, prostitutes, pregnant women and babies observed in a medical clinic, and male friends, including some fascinating ones of the mime artist Erwin Dominik Osen.

Most interesting are the artist’s provocative nudes of his final years when he pushed artistic conventions through his direct expression of human experience, fears and desires, all drawn in bold lines without any hesitation or erasure – displaying a truly astonishing draftsman ship.

His more radical nudes caused quite a bit of scandal amongst Vienna’s conservative circles and were considered pornographic at the time so much so that the young artist was briefly jailed in 1912.

Today, the nudes hanging here at the Courtauld seem even more daring, even more unnerving, than when they were produced.

‘The psychological charge of his work is palpable in the distinctive line of Schiele’s nudes, the influence of which reverberates in the work of important contemporary artists today,’ says Dr. Barnaby Wright, Daniel Katz Curator of 20th Century Art at the gallery.

Egon Schiele: The Radical Nude is at the Courtauld Gallery, London until 18 January

Egon Schiele: The Radical Nude is at the Courtauld Gallery, London until 18 January 2015.