A new world has opened up to us through a project we’ve been involved with. The Life Negroni is a book about a classic Italian cocktail. It is also the story of so many other elements, including history, people, art, design and branding – the components that have created this drink. And it has been a fascinating journey. But more on the full project later.

In terms of design history, two of the most intriguing companies we have come across on our journey have been Campari and Martini & Rossi. Campari is a Milanese institution – the liquid hijacks the fashionista city’s evening aperitivo ritual, its hot red hue decorating almost every bar in town. Martini’s story is lovingly linked to Piedmont, to the vermouth di Torino, and the more sober industrial Northern Italian city.

Both companies share an incredible passion for championing the avant-garde through some very sophisticated notions of branding. The two worked with very daring artists, including the Italian Futurists, exploring novel ways of promoting their concepts, experimenting with new typeface, and ultimately creating companies that have been able to surpass so many competitors through history. 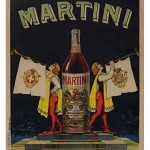 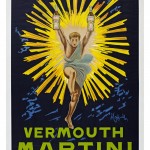 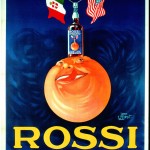 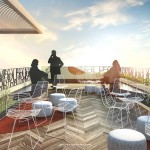 We have already published the story of Campari. The Martini & Rossi story began roughly around 1863 when three friends took over a vermouth distillery in the small village of Pessione outside of Turin. Salesman Alessandro Martini, accountant Teofilo Sola and vintner Luigi Rossi called their new company Martini, Sola e C.ia, renamed Martini & Rossi following the death of Sola in 1879.

The partners were attracted to Pessione for its great location nestled amongst the Monferrato hills and its wine producers, and the Turin-Asti-Genoa railway for easy access to the port of Genoa and the world’s exotic herbs and spices. So they purchased the farmhouses, vast surrounding fields and vineyards, and an elegant mansion house with spacious cellars that would become the home of Rossi and his family. Thus begun a journey to take the regional product of Vermouth di Torino to a world market.

Their first step was to perfect their product and create a smoother, more sophisticated and consistent vermouth, one that was far superior to their regional competitors.

Success came quickly for this dynamic partnership and the company took the pioneering steps of shipping crates of vermouth across the Atlantic to New York.

With its large Italian migrant population, and growing cocktail scene, sales of vermouth flourished there. Within a year Martini & Rossi became the sole exporters of three quarters of all vermouth sold in the country, and by the end of the century, the company was selling to over seventy countries.

Visiting the house of Martini which is still based in Pessiona, it is clear that the company was a highly controlled operation from the start. Administrative documents, business stationery, packaging, everything was beautifully designed, with a cohesive design language. Innovative advertising by some of the leading avant-garde artists, designers and writers, ensured the Martini myth was carried to the masses.

By the 1930s, such was the strength of the brand that their logo alone communicated a quintessential Italian lifestyle – full of gioia di vivienne. And by the 1960’s Martini had become the epitome of sophisticated Italy. Andy Warhol’s Pop posters alongside glamorous television ads reinforced this position.

There was the Milan Terrazza Martini, frequented by leading luminaries of the day, firmly implanting the brand in consciousness of contemporary society the world over. This year the company has teamed up with design consultant Pininfarina, a company we often write about in its connection with the motoring world, for a pop up Terrazza at Milan Design Week.

Today Martini remains the world’s number one vermouth producer continuing the tradition of working with leading creatives and with famous names from the word of art, design, fashion and film including in recent times Dolce & Gabbana and George Clooney.

The book The Life Negroni is published in the autumn 2015. To pre-order a copy email us at info@thelifenegroni.com.

Read The Story of Campari, of branding, advertising and patronage of the arts here.