These are exciting times for Bentley – this is a radical marque in bourgeois disguise. Steering the creative energy is Luc Donckerwolke, the gifted design director who has been quietly, quietly making some fundamental changes here since he joined over two years ago.

Soon on his arrival Donckerwolke formed an entirely new team (the ‘dream team’ as he likes to call them) of established and emerging international designers. He put forward plans for a contemporary studio to replace the uninspiring post-war building that sits in the midst of the manufacturing plant in Crewe.

He then turned his gaze at the collection, firstly renewing old models, which we will be introduced to one by one, and creating brand new cars like the Bentayga SUV to be unveiled in the autumn. Secretly, he was also busy sketching a radical new concept – the EXP 10 Speed 6 coupé. 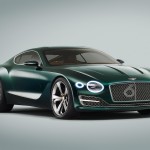 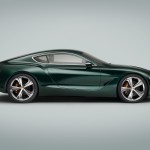 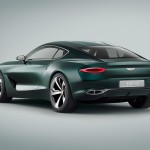 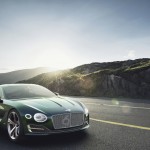 I was privileged to be one of the only journalists allowed access to the concept car months before its unveil here at the Geneva Motor Show today. Donckerwolke guided me through his ideas behind the car and, fundamentally, what it means to the future design and identity of Bentley.

This elegant two-seater sports car concept is the expression of his ideas – his vision for Bentley design going forward. It is radical for Bentley, the ‘bad boy of Bentley’ as the designer tells me, and yes, it may raise a few conservative eyebrows. Yet Donckerwolke is aware that the world is evolving and with it so must the luxury bubble in which Bentley resides.

‘This is a driver’s car – a more extrovert Bentley designed for the customer who is willing to explore this incredible performance car,’ explains Donckerwolke excitedly. ‘It is aiming at the emotional side, designed to complement the brand and not be a substitute for another product.’

The EXP 10 is a hybrid car. In other words this is a vision for a modern sports car that is efficient yet uncompromisingly powerful. The designer agrees that the technology is fitting for Bentley because of the silence and additional torque, ‘so it signals enjoying hybrid as a way to be sportier, for better performance.’ 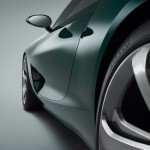 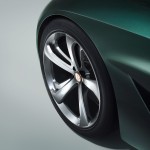 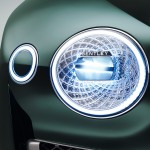 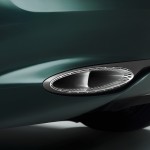 For Donckerwolke the process of designing this car was just as crucial as the finished product. He used this occasion to entice his team to re-imagine Bentley, to question their own prejudices as to what this marque is, to break down their preconceived notions. And it worked as he explains:

‘I wanted the team to be bold, experimental… for us to question every classic Bentley element. I wanted more emotion from the designers and I’ve never seen a team so motivated, so hungry to change things.’

The car had to be more sculptural so as to suggests agility, dynamics, athleticism, and as he insists be ‘bionic’. Donckerwolke warms to this notion saying the idea is to ‘almost wrap the components in a minimalist coverage unveiling the athletic side. It is clothing a technical skeleton’.

As we browse through his book of inspiration we come across a picture of actor Daniel Craig as James Bond. Donckerwolke is amused as he compares the car to the new 007 in how the Ian Fleming character has evolved to be darker, tougher, more sinister, and for sure more real.

His design too has to show a contrast to the modern environment. ‘This would be the car that Bond would be driving if he were to return to his origins,’ he smiles.

Many of Bentley’s classic cues have been challenged – the grille has been dropped to be much lower, the wheels are strongly sculptured to show movement, and the oval lights have been removed from their frame for a purer form. 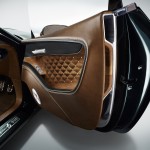 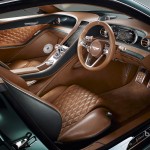 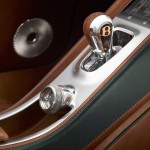 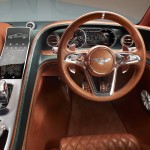 The team observed the material, patterns and structures of architecture for the design details. Architectural meshing, for instance, informed the grille design so that the blades of metal now appear to be naturally fused together. For the light design, Donckerwolke replaced the chromed plastics in the construction with sculpted industrial crystal.

Bentley interiors are always rather special and the EXP 10 is no exception. Here the emphasis is on creating a feeling of lightness to express that this is a driver’s car, and that it is a sustainable sports car. Yet the marque’s craftsmanship has also been put to the test with some interesting design details such as the quilted wood door panels.

On the instrument panel, the team have intelligently balanced the analogue and digital so that it becomes a blend of the precision associated with technology and the romance of the nostalgia of the sports car.

The designer says he had ‘the new Bentley boy’ – or girl – in mind throughout this project. Someone, he notes, who wants to drive this car, an extravert, someone who is sporty and willing ‘to explore the incredible performance of this car’.

Donckerwolke is keen to note that he is not erasing Bentley’s history. This project is an exercise in evolving the marque’s design language for the future ‘without dogmas, without bias,’ he stresses. ‘We are weighing what is essential and what is no longer needed.’

He is adamant that the EXP 10 is not some ego-induced show car. ‘We wanted it to impact on the way we work. It had to be a message not only to the outside, but also to the inside, to Bentley, that our attitudes are changing.’