Painting was out of fashion in the 1990s. When I enrolled on a foundation course in art and design age 18, as an art form it was, you could say, discouraged. The contemporary art world was consumed with more theatrical forms of expression than the humble paint on canvas. Alas I was too young and impressionable to march ahead with the only way I could express my inner world.

This came to mind whilst visiting Richard Diebenkorn at the Royal Academy of Arts in London. Benefitting somewhat by his geographical location in California and the American West, Diebenkorn (1922-1993) was able to isolate himself from the schools of art that tended to be born and breed mainly on the more edgy East coast.

He was part of the abstract expressionist movement that came to dominate American art of the time, but much like his contemporary Cy Twombly, Diebenkorn worked on the peripheries of fashion and in a historical context his work benefits greatly from this. 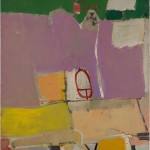 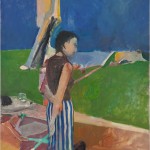 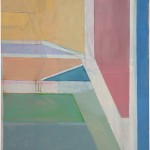 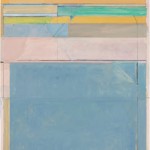 This is the first survey of Diebenkorn’s work in the UK in almost 25 years examining the artist’s changing career from the abstract expressionism to figurative and minimal abstraction.

Apart from a spell in New Mexico, Diebenkorn lived and worked in California for most of his life – the colours, the textures, space and the pace of America’s sunny coast are reflected strongly on his pallet.

There are over 50 works here from public and private collections in the US and Europe that together reveal Diebenkorn’s wonderful artistic independence.

The exhibition is arranged to reflect the three distinctive periods of his life starting with his early abstract expressionist work while he was enrolled in a Master of Art programme at the University of New Mexico, Albuquerque, later during a teaching post in Urbana, Illinois and when he first arrived at Berkley, California.

The colours are bright, vivid, bold and expressive here. You can almost feel the heat of New Mexico in paintings such as Albuquerque #7 of 1951 and the more orderly landscape of Northern California in Berkley #57 completed four years later.

The artist turned to figurative painting and landscape studies whilst in Berkley between 1956 and 1966, which confused his contemporaries as it was seen as unfashionable and regressive at the time.

The sketches and studies shown here are possibly not Diebenkorn’s strongest body of work, but they reveal so much about his thinking, of how he bravely set about to explore a new genre that took him away from his strength, colour.

They also resulted in some exciting paintings. For instance Girl on a Terrace, 1956 is a stunning oil on canvas that is so bold in colour and composition and yet subtle in its expression.

The final space is dedicated to Diebenkorn’s most recognised body of work, the large non-objective Ocean Park series created between 1967 and 1988 whilst he lived in Southern California.

These were abstract compositions that were not intended as landscapes. He said at the time ‘I see the light only at the end of working on a painting’. Here the painter capture the smooth light of Southern California like no other painter. Diebenkorn created a new visual language of abstraction with the Ocean Park series.

There is serenity and peace in this last room. I recommend sitting silently on the bench in the centre, gently observing these giant canvases.