The F-Pace is Jaguar‘s first sports utility in its 70-year history. Designing an SUV was not an easy task for a marque associated with a low, long and sleek vernacular, and with such a rich sports car heritage. ‘The customer wanted one,’ admits Ian Callum, ‘It is a practical car but with the spirit of Jaguar,’ adds the design director. 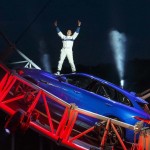 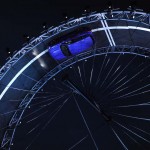 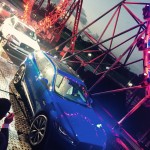 We’re in Frankfurt at the biannual international motor show. The previous evening the F-Pace proved its claim as the ‘sportiest SUV’ by breaking the Guinness world record, and defining gravity, on the largest ever loop the loop completed by a road car. Witnessing stunt driver Terry Grant race inside the 19.08m tall, 360-degree circle was pretty spectacular.

The F-Pace unveiled at Frankfurt is a production car closely based on the 2013 C-X17 concept study. It’s underpinnings are the marque’s lightweight aluminium architecture which has allowed the design team the freedom to create a car with ‘latent poise, a svelte car with attitude,’ smiles Callum. 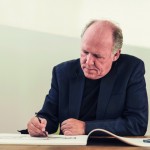 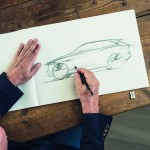 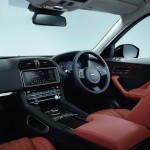 ‘Of course a crossover is vertically more challenging,’ admits Al Whelan as we caught up with him on the Jaguar Land Rover show stand, ‘but in many ways the intensive aluminium architecture helped us set up the building blocks,’ says the chief designer, adding, ‘You get this right, and the Jaguar traits follow from that.’

It also allowed for a roomier cabin. The F-Pace can accommodate five adults and there is a versatile 650/1740-litre cargo space. The doors come alive with Jaguar’s signature blue ambiance lighting, and the optional panoramic roof expands almost the entire length of the car suggesting a more spacious cabin.

This is a highly intelligent car too, featuring the marque’s latest 8-inch touchscreen and infotainment system, with an optional 10.2-inch InControl Pro system, which can connect up to eight devices to a wi-fi hotspot in the car. 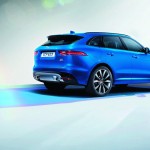 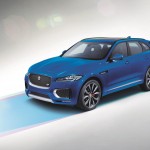 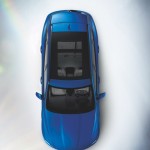 Whelan sees most of the competitors in the small crossover category producing quite similar proportions, ‘long overhangs and short rear overhangs, and balanced looking side views,’ he says.

So, when two years ago the team came to envisage a Jaguar crossover with the C-X17 concept, Callum insisted on taking the marque’s most recent designs, in particular the DNA of the F-Type coupé, as inspiration.

Whelan explains they set out to create a unique typography with the F-Pace ‘with a long bonnet, lots of tension on the side view, and of course big wheels,’ he smiles. ‘The key was to keep it sleek and exciting and I think we have achieved this.’

The F-Pace is handsome in the metal – subtly translating the Jaguar form language to a car that by nature should defy this. Callum had asked his design team to embrace Jaguar’s sporting heritage, extract some of the theories from the evocative cars in the company’s rich back catalogue, and apply it to the F-Pace.

The overall vision was ‘for it to be softer, more refined, and more muscular interpretation,’ notes Whelan. ‘We introduced the two strong character lines from the F-Type coupé, the long front fender and the rear haunch… and it all started to work.’

A full report from the Frankfurt Motor Show was published in Wallpaper*.