McLaren Automotive has ambitious plans. This relatively new company in its contemporary form, established only six years ago as the road car making arm of the race firm, is envisaging a £1bn expansion plan to produce fifteen new models and derivatives over the next six years. It is also aiming to increase annual sales from 1600 to 5000 cars, with half of these driven by sustainable hybrid technology.

We caught up with design director Frank Stephenson at the Geneva Motor Show last week as he unveiled the 570 GT, a perfect piece of aesthetic design and industrial engineering. 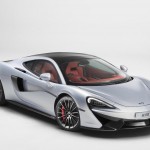 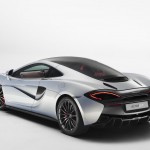 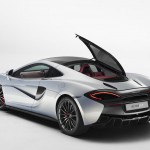 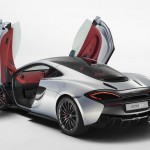 This latest car joins the 570S and C coupé in the more road-friendly Sport Series family. It shows how much the brand can expand in its product offering, but how far can you take this?

The 570 GT is one of the last building blocks. It completes our strategy that includes the Supercar and Ultimate range. We can of course add to this, introduce a city car, for instance – there’s room to move around.

You’ve set some pretty ambitious plans for a small company. How quickly do you sketch, design and develop cars?

For us designing the car is quick and this, I feel, is fresher and the design doesn’t get diluted. If you think about it too much you get cold feet! Here we don’t have time for too much discussion. We decide on the design straight away and boom it’s out there. The testing programme is very intense at McLaren as we have very little time for development. We are creating one car a year until 2022 at least. We imagine our cars, build them and then see them on the road. It is all very fast.

When I first gave the brief to my team that it has to have substantial luggage space and be the size of the Porsche 911 they designed a beautiful shooting-break, but it didn’t have an edge to it. It was just a pretty estate! So we killed this after six month and started from scratch but then decided on a fresh design approach straight away.

The car you say is the most practical McLaren with two boots, including the striking 220-litres boot space in the leather-lined side-hinged glass hatch. It must have been pretty challenging to design…

Yes. Initially I thought it was a joke! How can you put something on top of a hot engine? If you look at the 570S it is like Swiss cheese, it has holes everywhere to let the engine heat out. This car has the same engine so what we did was to suck the heat out from underneath the car, and through the lamps. This has never been done before. The issue is that the heat is so much that normally the plastic lenses on the taillights would melt, so we use special plastics that can take the heat.

Also our doors are becoming incredibly complex. Here we have 15 different pieces, which helps get air in the car and this makes our door structures complicated. 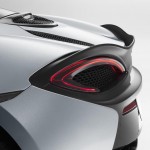 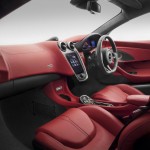 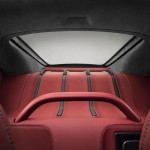 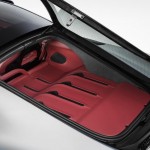 Would you say it is about having design integrity?

The challenge of creating something new is our reason to be – otherwise we’re not the leader. It is fun though. It is the excitement of discovering something new that hasn’t been done before and making this your top priority. Our cars are athletic, they have lean muscles and the cloth has to fit very close to the skin. We have to always strive to do less, less and less.

Our company is unique too in the way we work directly with our engineering team – we don’t have anyone from the outside coming in. The engineers here have the hunger like the design team to do something that hasn’t been done before.

You seem visibly excited to be working with McLaren. how would you define the brand?

Yes it is pretty exciting. In terms of design DNA we’re at a stage now where we’re building this, yet everything we do has to be functional. On the 570 GT, for instance, the lamp graphic where the heat comes out, that was functional and efficient so it will be used for future generations. It has naturally become a design element. The beauty of of what we do is that it doesn’t lock you – we can be unpredictable.

You’ve been with the McLaren Automotive team since the start. What’s been your favourite project to work on?

They get better and better. The 12C to make into the 650 was fun, as people didn’t think we could do emotion so we said watch this… then the P1 has huge emotion and is still looks like a McLaren and was basically designing a race car that is road legal.

With the 570 we knew the car couldn’t polarise; it has to be our volume-selling car and appeal to old, young, male and female so it had to be the new efficient 911. You don’t go home and say ‘wow I’ve seen a 911’, but hopefully you would about the 570 as we only make 2000 a year. We’re a small company so all ours cars are small volume.

Where is the brand heading now?

We have the smallest car design studio in the world so we haven’t got the resources to design cars for the future – instead we design concept cars for today. Now that we have the three lines (Sport, Super and Ultimate), it is time to establish the brand, work on credibility for people to see that we are making believable, exciting cars. Now we have the license to push further. We started quietly but if you saw what’s coming you’d see we’re really moving on… The last thing we will do are predictable cars.

You mentioned the possibility of an entry-level McLaren earlier. Would you consider a city car?

A city car is not in our strategy yet but I’m working with a couple of universities, in Turin and Sweden, where I asked the students to design an ultimate city car for the 2029 Frankfurt Motor Show to celebrate our 20th anniversary.

We’re not concerned with cost but to shoot high in terms of McLarenisation, materials, the electric drive technology, packaging, visibility and safety. I can see a car like this maybe in our future.

It makes sense to utilise the advanced McLaren racing technology…

Absolutely. For the 570 we use a carbon-fibre tub that is hugely expensive to create, so yes it makes sense to filter this technology down. The safest thing you can have for a city car is a carbon cage.

Visibility is key in a city car but you also don’t want to be exposed so perhaps there’s a way of working with glass, tinting it, so it gradually gets clear as it comes up or you can hit a button for it to go foggy to transparent glass. By 2029 the car will of course be autonomous.

What are the challenges of designing ultimate sustainable McLaren sports cars?

Weight is a huge thing for McLaren and for us to build an electric car we have to think about the battery size. For handling we would want to keep the batteries in the centre of the car, ideally low and positioned at the bottom of the car, and the motor would need to go right behind the driver, and then you’d consider where the driver and passenger would sit. The restriction is how thin and small can you make the battery not to impact on the handling of a sports car. We have people working on the battery technology now.

And how would you respond to autonomous driving; the cars are after all pure driving machines?

Very easily, as with autonomous driving you still have the choice to drive or be driven. So imagine you’re living out in the country, heading towards London you enjoy the car on the more dynamic country roads and let the car drive you in the traffic of the M25.

On the weekend you go to the track, you push the button for normal, fast or crazy fast and the car will take you around the track on the correct lines, shows you the right breaking points and what gear to use on a few laps. Then you take to the wheel and if you make a mistake it will correct you, much like a professional driving teacher. Unlike a real teacher, however, it won’t make mistakes.

With McLaren the relationship is always with you and the car, and this can be an extension of that. As long as you have a bit of control, it isn’t about the car just driving you, and you use this to learn from your car… then that is ideal.

For the autonomous future we will need to look at increasing the interior content. If being driven you may want to learn about the surrounding so we will offer a virtual reality scenario where the driver feels immersed into the surrounding. We are working on modern VR, and for us modern luxury is directly linked to technology.

The fascinating thing about car design is that you do have these parameters, which challenges the design. I love the challenge. It is the job of the designer to think differently.