It simply reads ‘To Her’ and it greets me as I make my way to visit my uncle, buried along one of the crooked paths covered in wild flowers, the grass in places coming up to my knees. It is a captivating site for the words and for the design of the tomb itself. Carved in 1844 by the sculptor Pierre Puyenbroeck, a triumphant figure of Hope, once gas lit, sits gallantly on top with a sculpted palette, easel and brushes suspended below. The Grade II listed tomb in Kensal Green Cemetery was erected by Alexis Benoît Soyer (1809-1858) to the memory of his wife, the notable English portrait painter Emma Jones Soyer who died age 28 after a miscarriage induced by her fear of thunderstorms. 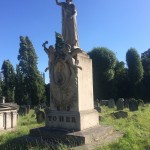 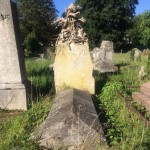 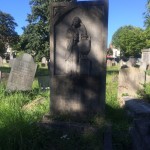 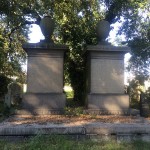 Alexis Soyer was a senior chef at the Reform Club; he was a leading dietician of the time, responsible for reforming army catering in the Crimea. The tomb is also home to the Flemish painter François Simonau, Emma’s teacher who later married her widowed mother. This is a grave, yet the monument is hugely uplifting. I am reminded of the words of Danish designer Timothy Jacob Jensen, who once told me coffins should be more like ‘the next home rather than a final one’. 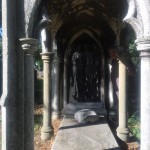 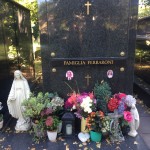 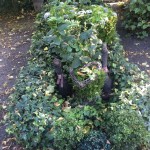 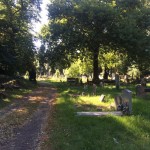 Kensal Green Cemetery, built in 1883 to resemble the Père Lachaise Cemetery in Paris, is the oldest of London’s so-called magnificent seven, a term applied to the largest of the private cemeteries of the nineteenth century. With its thirty-plus species of bird and wildlife, it is also a wonderful sanctuary from the urban noise of the adjacent gritty Harrow Road. Wandering these wild lanes, the late afternoon summer light adding to the ethereal quality, it strikes me how democratic a space this is too. Kensal is home to three chapels and serves all faiths. Here large mausoleums of the wealthy past and present sit side-by-side smaller graves, daunting Gothic monuments and softer Grecian-style buildings. 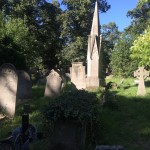 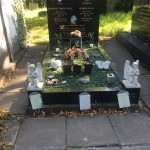 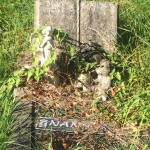 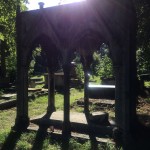 The design of each grave says a great deal about the time in history. There are important figures in science and the arts buried in elaborate tombs, Godfather style vaults with long Italian names scribbled in fancy type; there are newer graves of a newer wave of immigrants, some with fresh, many with artificial flowers. Here is the story of London – of its inhabitants, of mortality, of migration.

‘For there is good news yet to hear and fine things to be seen,’ wrote G.K. Chesterton in 1927 his poem The Rolling English Road, ‘before we go to Paradise by way of Kensal Green.’