I’m sitting in the magnificent Somerset House courtyard overlooking Edward Barber and Jay Osgerby’s towering navy sculpture that moves ever-so-slowly to the nudge of the September wind. Forecast explores Britain’s rich maritime history and its involvement with the development of wind energy. Created by the local designer duo with the help of the V&A Museum and engineering firm Arup, it evokes the past and proposes a future powered by renewable energy. It is also meant as a wink to the nations obsession with the weather.

Somerset House is hosting the inaugural London Design Biennale with the working title Utopia by Design. The theme celebrates the 500th anniversary of Thomas More’s classic Utopia with hugely diverse responses from the thirty-seven participating nations. Some pavilions have looked at tangible solutions for a possible utopia. Others have observed more abstract concepts. A few have envisaged a future that is more dystopia than utopia. One or two are relying purely on visual dazzle with sadly only a tenuous link to the working title. Together, though, they present an intriguing tapestry of possibilities for a shared utopian future. 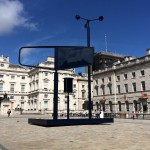 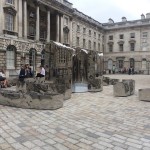 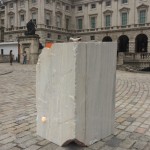 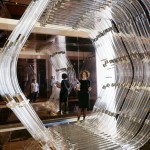 The sky has turned abruptly from the beautiful blue it was a few minutes ago to a worrying grey – the angry clouds adding to the drama of the Somerset House setting. And I cannot help thinking the weather is also highlighting the volatile nature of utopian ideologies and dreams, of some of the modernist design it inspired, and later crushed.

‘We invited countries to interrogate the history of the utopian idea and engage with some of the fundamental issues faced by humanity and suggest solutions to them that use design and engineering,’ explains the biennale director Christopher Turner. He wants this ambitious bi-annual project to show the power of design to question, to provoke, to inform debate and find alternative solutions.

Lebanon’s pavilion certainly created a visceral reaction. Winner of London Design Biennale Medal 2016, the interactive installation is a snapshot of Beirut street life, not in an imaginary future but now, in its seemingly simple present. Mezzing in Lebanon is the work of architect Annabel Karim Kassar of AKK who’s installation is a constructed scene from the streets of the capital where a barber provides wet shaves, a cinema shows Lebanese classics enjoyed on hand-sewn mattresses, fresh bread is backed and kebabs and falafels sold. You hear street noises, smell urban life here. 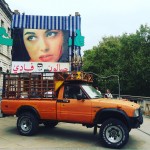 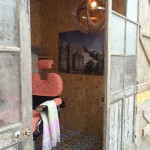 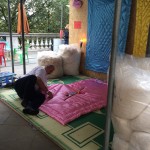 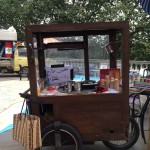 Mezzing in Lebanon tells the story of a utopia that can be found in the present, a utopia of close-knit communities, of people enjoying food, music, street life. It is the story of real life in a volatile country where every day living as such takes on strong utopian longing. It reminds me very much of growing up in a somewhat similar setting in the Middle East where communities form micro utopias in the midst of the wider geo-political chaos around.

Elsewhere, Germany’s pavilion is a quieter affair, contemplating utopia’s more subjective roots. Designed by Konstantin Grcic, the pavilion comprises a light and dark room – the former exhibits the John Malkovich quote Utopia Means Elsewhere, whilst in the dark room viewers face a screen projecting a crackling fire as their minds drift off, for Grcic feels utopia isn’t a simple ‘fantasy of perfection’ but an open-ended concept.

Others have imagined entire utopian cities of the future. The Mexican installation Border City by architect Fernando Romero, for instance, is a fully-sustainable, car-free place designed to accommodate rapid growth and encourage interaction. This binational city is built on the topical border between Mexico/US. China takes on a similar task. Here the concept comprises a series of self-sufficient tower/cities within one megalopolis, Shenzhen, currently the country’s fastest growing urban setting. 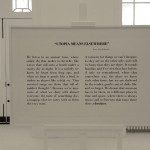 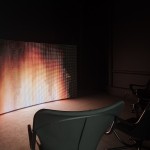 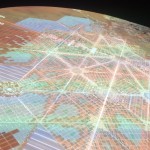 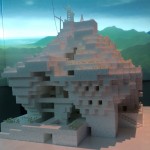 Others have looked at issues of national identity and migration. Turkey’s entry is a contemporary ‘wish tree’ by design studio Autoban. Visitors are encouraged to send messages through the tunnel of pneumatic tubes that symbolise the country’s past and present migration paths. Italy’s is a floor of twenty white flags by a range of designers as symbols of a utopian emblem of global truce seeing. Here the curators see utopia as an act of deconstruction rather than construction.

Some countries have looked at historical models of failed utopias. Tunisia revisits Hungarian/French architect Yona Friedman’s fantastical utopian fantasies namely his mobile architecture. Russia showcases previously unseen blueprints dreamt up by Soviet designers, and screens a film about a utopia that never saw the light of day. Whilst Chile’s FabLab Santiago rebuilds Cybersyn, a futuristic concept city envisaged under Salvador Allende and created by the maverick cyberneticist Stafford Beer in the early 1970s.

Some pavilions dazzle with their colours and textures. Chakraview by India Design Forum, for instance, is a woven installation of the country’s cultural heritage where traditional textiles and ancient mythology interact with modern design and contemporary innovations – the blend of the social, political and religious climates is there to represent modern India. 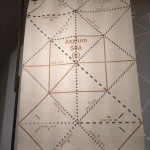 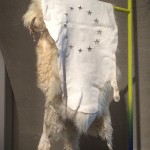 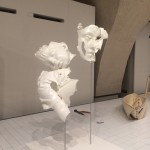 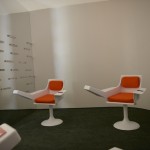 The South African pavilion is also worth noting for its unusual approach to the subject. Otium and Acadia are a series of hand-crafted oversized soft toys made with recycled materials and hang like hammocks and swings from the Somerset House ceiling. The work of designer Porky Hefer – a very interesting designer known for his imaginative seats that challenge conventional material – viewers are encouraged to climb into the open mouths of these supposedly dangerous animals for an alternative view. It is reflective of South Africa’s turbulent past, and also a critic of the culture of modern consumption, of throwaway products, Hefer tells me. His fantastically playful animals release the child in us all, spark our imagination and evoke a sense of community.

Jaguar, LDB’s main sponsor, offers an installation addressing the role of the car in a utopian future. Design director Ian Callum proposes real solutions – ideas such as sustainability in car production and vehicle use, and digital connectivity that will help better lives. He tells me about his concepts of shared private transport whereby you belong to a Jaguar club, drive your desired car but have others share this machine when not in use. He sees the urgency in a car that is ecological, compact, perhaps a two-seater and a perfect city transport, yet desirable – and the laser light installation here is such a vision for the marque. 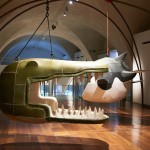 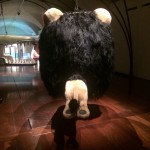 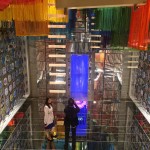 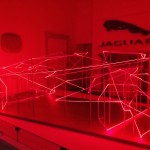 I escape the rain to the Somerset House bookshop and purchase a copy of Utopia sold here with a variety of enticing cover designs. Thomas More presented a radical alternative with his imaginary utopia – a term he coined to mean both a ‘good place’ and ‘no place’. The philosopher assumed this would be a satirical fiction ‘whereby the truth,’ he wrote, ‘as if smeared with honey, might a little more pleasantly slide into men’s minds’. The fact that Utopia has never been out of print is also telling – we are still in search of finding, or creating this perfect vision of living.

The London Design Biennale comes at an important time too. As the UK cautiously navigates its way out of the European Union, London is eager to preserve its place as the world’s creative hub, somewhere that is international in outlook… welcoming. LDB’s director Turner wants the event to be ‘ambitious, creative and inclusive’ whilst sir John Sorrell tells me he sees it securing the city as the world’s design centre in the way the Venice Art Biennale has done so for the Italian city. ‘If you believe in design you know it can make the world a better place, and I say the more international design dialogue the better,’ he says.

Groups of homeless refugees lie in the grass moments away in Embankment Park as I make my way to the station, their heads resting on their modest belongings. Now, possibly more than ever in history, we should be revisiting utopian visions in the context of the contemporary world.

London Design Biennale 2016, in partnershop with Jaguar, is on from 7 to 27 September at Somerset House.