A pavilion that mimics a grand tree and offers a spectacular waterfall has won the 2017 Serpentine Pavilion project. The Serpentine Gallery’s artistic director Hans Ulrich Obrist and CEO Yana Peel have named architect Diébédo Francis Kéré the latest designer for the annual project. The award-winning architect, who leads Kéré Architecture in Berlin, will bring his characteristic sense of light and life to Kensington Gardens, Hyde Park when he constructs his temporary structure later in the year to be enjoyed by the public during the summer months. 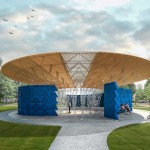 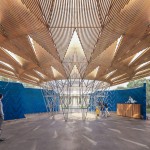 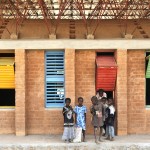 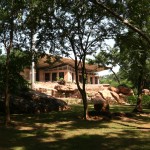 Kéré is committed to socially engaged and ecological designs. Here he is inspired by the tree that serves as a central meeting point in his childhood village Gando, Burkina Faso where in 2004 he received the Aga Kahn Award for Architecture for his primary school design.

For Kensington, Kéré has designed a responsive pavilion that seeks to connect its visitors to nature and to one another. It also engages with our unpredictable summer climate. A central steel framework supports the expansive roof to mimics a tree’s canopy, allowing air to circulate freely whilst offering visitors shelter.

There are four planned entry points with an open-air courtyard in the centre for visitors to sit and relax during sunny days. In the case of rain, an oculus funnels any water that collects on the roof into a spectacular waterfall effect, before it is evacuated through a drainage system in the floor for later use in irrigating the park. The wooden roof and wall system act as solar shading, creating pools of dappled shadows by day whilst at night the walls become a source of illumination as small perforations twinkle with the movement and activity from inside.

‘Every path and tree, and even the Serpentine lake, were all carefully designed,’ says Kéré. ‘I am fascinated by how this artificial landscape offered a new way for people in the city to experience nature. In Burkina Faso, I am accustomed to being confronted with climate and natural landscape as a harsh reality. For this reason, I was interested in how my contribution to this Royal Park could not only enhance the visitor’s experience of nature, but also provoke a new way for people to connect with each other.’

Kéré’s Serpentine Pavilion will host a programme of events exploring questions of community and rights to the city, as well as the continuation of Park Nights, the Serpentine’s public performance series.

Kéré’s design follows Bjarke Ingels Group (BIG), whose ‘unzipped wall’ structure was visited by more than 250,000 people in 2016, making it one of the most popular pavilions to date. He will be the seventeenth architect take part in this inspired public art project that launched in 2000.

Serpentine Pavilion 2017 will be at Kensington Gardens, Hyde Park, London from 10 June – 9 October