‘I get my facts from books, stuff on atomisers, the blues, ethyl alcohol, geese in Egyptian glyphs,’ wrote Jean-Michel Basquiat, the American artist who, in his short life (1960-1988), drew, painted, wrote, made lyrical, vibrant, radical, exciting, colourful, powerful works of art. ‘I don’t know how to describe my work,’ he said later. ‘It’s like asking Miles, how does your horn sound?’

Basquiat: Boom for Real at the Barbican Gallery takes us on a journey into his world. It reveals a raw energy as fresh today as when Basquiat began creating art, first on the streets and subways of New York with his classmate Al Diaz under the pseudonym SAMO© (same old, same old shit), then on canvas in the late 1970s and early 80s.

He remained part of the underground art scene even when he gained recognition following New York/New Wave, the landmark 1981 exhibition by Diego Cortez of the Mudd Club, which portrayed the city’s vibrant downtown countercultural scene. Here the work of the young Basquiat was shown alongside the more established Andy Warhol, Robert Mapplethorpe, David Byrne and William Burroughs. Together they captured the sprawling, dizzying energy of New and No Wave music and its impact on visual art. 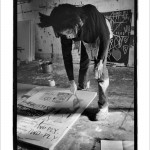 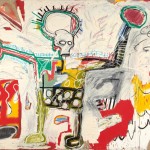 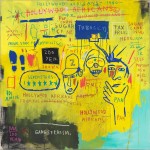 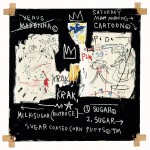 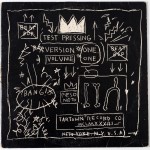 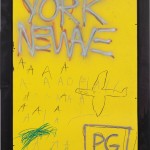 The Barbican, its open industrial gallery spaces, large slabs of raw concrete softening the volume, the sounds of Duke Ellington echoing in its double-height, feels the exact right setting to be showing the first large-scale exhibition in the UK of one of the most significant painters of the 20th century.

Through image, text, sound Basquiat comes alive as he comments on the injustices in society making clear statements against racism, colonialism, class war, slavery. We discover his inspirations. Music is a powerful source – free jazz, early bebop, Bach even – and he rarely worked without something playing in his studio. Basquiat had a library of some 3000 records and his obsession was so much that he traded paintings for rare blues and bepop LPs. His hero Charlie Parker is referenced in the title of Basquiat’s 1983 record Beat Pop.

On exhibit are his notepads. He scribbled lines, poems, lyrics in neat capital letters as if he knew they would one day be on show. In one he writes: ‘I feel like a citizen. It’s time to go back and return as a drifter.’ Elsewhere, ‘Nicotine walks on eggshells medicated, the earth was formless void, darkness face of the deep, spirit moved across the water and there was light. It was good. Breathing into the lungs, 2000 years of asbestos.’

This is a show about life and time. We are immersed in Basquiat’s world but also raw New York of the early 80s. We learn of his fascination with art history and philosophy, his liking of the abstract expressionist Cy Twombly (an overriding influence), and fondness of Beat literature and poetry. Basquiat takes energy from the clash of high and low culture, from growing up in the chaos of 70s Bronx and later from downtown Manhattan’s countercultural scenes, street life, black-American life. He said: ‘I never went to art school. I just looked. That’s where I think I learned about art by looking at it.’ What’s evident here is that Basquiat gives us a new space for thinking. He foresees how we have come to navigate the labyrinth of information, of stuff, and our thoughts today.

Basquiat: Boom for Real is at the Barbican until 28 January.