Simple block shapes made of raw concrete – this is how brutalism has come to be defined. Yet behind these concrete buildings – some poetic and sculptural – lay a movement with strong principles. New brutalism was controversial the moment it emerged on the architectural scene in the 1950s. It deliberately set out to be hard edged and radical. Progressive social ideals informed much of its thinking. Ironically brutalist building design is often blamed for the failure of social housing. Trellick Tower in London, a masterpiece of social housing, was once dubbed ‘the tower of terror’ and is amongst the vilified. Yet at its best, brutalism was a heroic movement with highly progressive origins.

A new book SOS Brutalism, a Global Survey sets out to preserve its legacy and many of its buildings in danger of demolition. Initiated by the Deutsches Architekturmuseum (DAM) in Frankfurt and the Wüstenrot Foundation, it studies the movement on a broader scale and within the wider context of time, ideology and location.

Brutalism’s theoretical roots were British and the term was coined by the architectural critic Reyner Bonham. His was a twist on béton brut, the French term for raw concrete and its use in design by the father of modernist architecture Le Corbusier. His 1952 Unité d’Habitation in Marseille is largely seen as a model for the new brutalism that followed. Made of roughly-cast raw concrete, the twelve levels house large apartments accessed from interior ‘streets’, which are raised up on columns replete with a roof terrace. 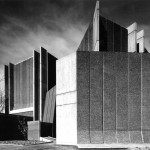 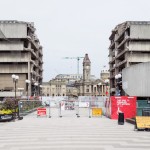 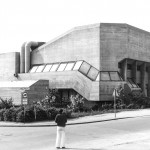 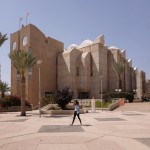 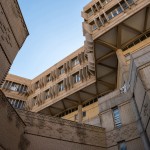 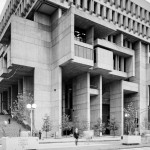 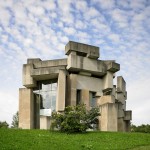 That same year Alison and Peter Smithson, the husband and wife team at the forefront of brutalism, translated some of these themes into their unbuilt design for the Golden Lane Estate in London. Here Le Corbusier’s internal ‘streets’ became exterior ‘street-decks’. Bonham wrote in 1955, ‘what characterises the new brutalism…is precisely its brutality, its je-m’en-foutisme, its bloody-mindedness.’

Following World War II opinions were divided as to what should be the architectural language of the new era – a new modernism to reflect new times and help rebuild shattered communities. The responses were mixed. In the UK, cheap pre-fabricated modular buildings went up quick and fast to create much-needed schools and hospitals with the domestic scene largely dominated by two-story detached and semi ‘garden suburb’ style homes. It was within this scenario that a group of architects, dissatisfied with existing forms of modernism, made a conscious decision to create socially-responsible buildings. Brutalism was about celebrating the heroic spirit of earlier modernist architecture.

Many of the architects believed humans should be at the centre of their design themes. Whereas earlier modernists were influenced by speed and technology – by boats, the motor car – many brutalists were inspired by humans, their interactions informed the design.

As post-war austerity gave way to the confidence 60s, brutalist buildings were commissioned across the nation as concrete ‘streets in the sky’. Great examples are the Royal Festival Hall and South Bank Centre in London, as well as Goldfinger’s Trellick Tower and Smithsons’ Robin Hood Gardens – both of which were completed in 1972. Robin Hood Gardens was a summary of these ideals. Here two blocks contained both flats and maisonettes, and with the absence of cars, residents were to use the ‘streets-in-the-sky’ thus encouraging social mixing and community creation. Sadly, the 1970s were an altogether different time and soon poverty, crime and vandalism made Robin Hood and Trellick posters for the failure of brutalism.

SOS Brutalism is large, informative and lavishly-illustrated. The book identifies and analyses some of the key brutalist buildings, 102 to be precise, around the world and is therefore a fascinating study of the movement, how it ended up responding to regional voices and concerns. Its roots may have been British, yet raw concrete became a global language of architecture in the 60s and 70s with a shared vision for re-inventing modernism.

With today’s fragmented societies, displaced communities and the widening gap between rich and poor, some of the more utopian brutalist principles feel relevant. It could explain the movement’s new-found popularity. Perhaps elements of its progressive ideology will invite a set of socially committed idealists to find a new language of architecture that engages with our current wider social issues, one that could help rebuild broken communities.