I witness the global financial crash, enter the Arab Spring, observe Barak Obama’s vibrant presidential years, then Trump’s messy aftershock – sit in support of demonstrators in the Occupy movement and Deepwater Horizon oil spill, feel the shock and horror of the Charlie Hebdo attack and face the tragedy that is Brexit. The lack of windows and natural light in the basement gallery space at the Design Museum magnifies this feeling of complete immersion, of being wrapped within the political and social turbulence of the last decade. It also reveals the sheer visual and visceral power of the graphic images that have come to define this era.

This is the premise for the new exhibition here Hope to Nope: Graphics and Politics 2008-18 (until 12 August), a study of how political graphic design reached new powers in the turbulent last decade, and how it spread with such speed to steer in the most unpredictable of directions thanks in part to social media. A decade ago, who would have guessed the way new media will completely alter how we view news, see image and digest information. What was then a new medium for communication now sits semi-comfortably with traditional media, as journalists and broadcasters work alongside hashtags and memes and influencers. We are all trying to find a balance but what is evident here at the Design Museum is that new media has completely altered how graphic political messages are made and distributed, and the power of graphic design has arguably never been greater. 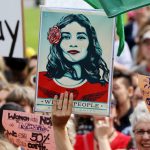 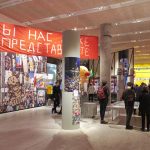 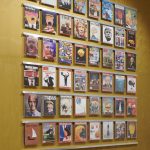 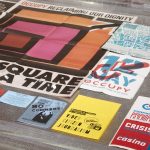 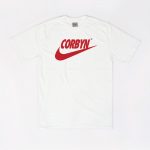 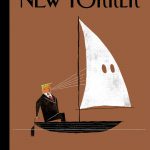 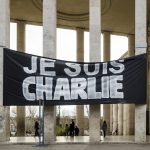 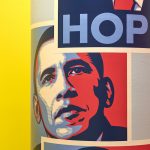 Hope to Nope comprises three main sections: power, protest and personality with a large graphic timeline dissecting the gallery space to chart the role of Facebook and Twitter in global events of the last decade. Power explores how graphic design is used by the establishment to assert national and political authority, and how that iconography can be subverted by activists and opponents. Protest displays graphic design by activists and demonstrators, while personality examines the graphic representation of leading political figures. One wall, for instance, is dedicated entirely to Donald Trump, his trademark features caricatured across the covers of more than 50 international magazine covers – including The Economist, TIME, Der Spiegel, The New Yorker.

Cocooned here under the safe architectural walls of the Design Museum, I am transported to my former life, a childhood of war and revolution, of displacement, of composing childlike copy for equally naïve hand-painted political posters, of the excitement of carrying these messages to the streets. Ultimately Hope to Nope exposes the sheer power of arts and ideas to help make change.