The fun pop art of American artist Jeff Koons is currently on show at the Fondation Beyeler in Basel, Switzerland. Inside the expected sculptures are there. Balloon dog, Tulips and Michael Jackson & Bubbles occupy the main rooms. But it is outside where the real treasures lie.

At the back of the gallery you’ll find Ballon Flower (Blue). It looks like it’s floating on the surface of the water with endless reflections delighting between pond and sculpture. 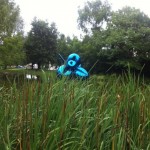 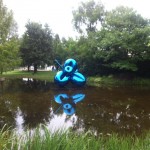 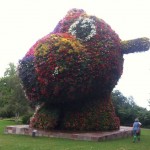 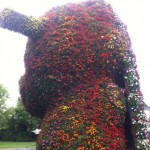 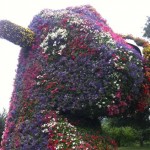 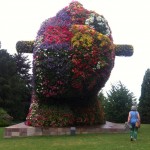 And a rare treat is Split-Rocker, a colossal floral sculpture made of thousands of real plants. The piece was first exhibited at the cloister of the Palais de Papes in Avignon, then again a few years later in the gardens of Versaille. The sculpture – half dinosaur, half pony – shows the split head of the animal that looks simultaneously forward and to the side, giving it the feel of a monstrous children’s toy.

We met Koons back in 2010 at the Pompidou Centre in Paris as he unveiled his BMW art car. Read the interview here.

Dungeness is not a place associated with holidays or relaxing. Its bleak shingle beach, dotted with old fishermen’s huts and with views to one of the country’s older nuclear power stations, is only an oddly appealing landscape. The skies are vast and often the only sign of life is the world’s smallest railway trundling past.

It is in this back corner of the UK’s Kent coast that Living Architecture chose to locate its second destination – the Shingle House. 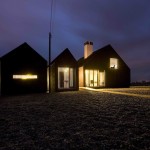 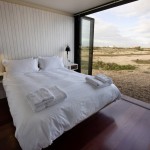 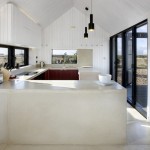 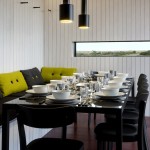 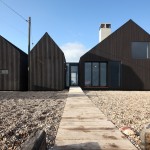 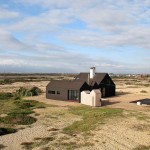 Designed by young Glaswegian architect NORD, the house takes on the footprint of its predecessor and is divided into three main areas, a kitchen/dining space, a bath-house and the main living and sleeping quarters complete with mezzanine level.

The building’s tarred timber cut shingles give it a cocoon-like appearance, which is welcoming when arctic winds are blowing outside. Inside a combination of whitewashed wooden walls and polished concrete floors are interspersed with a series of soft furnishings, giving a more homely feel to what is essentially a who’s who of interior design.

Winter guests will welcome the wood burning stove and sunken bath, where a floor length window lets you enjoy ground-level views of the landscape.

Everything here has been thought through, from the Peter Reed-designed bed linen and high-tech Miele kitchen, to windows positioned so dinner guests can get views of the power station and horizon.

The grey shingle and vast skies give even more meaning to the comfort and luxury that enwrap you here.

Led by its creative director, writer/philosopher Alain de Botton, Living Architecture offers the public a chance to experience living in houses designed by the likes of NORD, Zumthor, Michael & Patty Hopkins, Jarmund/Vigsnæs Architects and MVRDV. The holiday lets are set in some of the most unusual locations around the country.

Robin Hood Gardens – a housing estate on the fringes of Poplar in East London – is an example of mid twentieth-century architecture on the brink of extinction.

Much love has been shown to the Alison + Peter Smithson-designed project over the last few years, spurred on by a campaign for listing spearheaded by UK magazine Building Design which collected over 1,000 signatures from across the world.

Architects including Zaha Hadid and Richard Rogers tell of the influence the building and the prolific couple have over them, while one of the most compelling arguments on why the estate should be kept comes from Dickon Robinson’s evidence compiled on behalf of the The Twentieth Century Society‘s submission for a review of the listing decision. 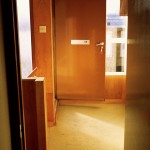 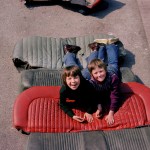 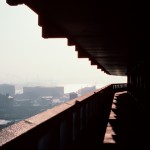 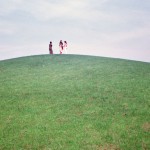 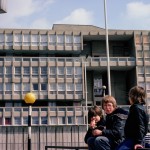 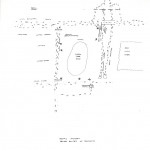 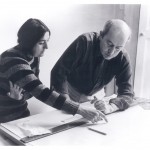 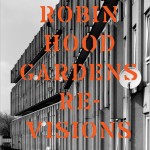 Completed in 1972, Robin Hood Gardens is a design very much of the era – incorporating the then much lauded ‘streets in the sky’ concept, with wide landings where people living on higher floors could socialise as if on their doorsteps on the ground.

There are two main blocks, both with a long, linear shape, built from pre-cast concrete and home to 213 flats. The lower block is seven storeys high, the taller ten. Between the two buildings is a landscaped grassy area, designed as a recreation and rest area for residents, built using the rubble of the houses demolished for the project.

Robin Hood Gardens Re-Visions collates a series of photographs, essays and a conversation between the Smithsons detailing the full history of the estate.

The original sketch drawings and plans, complete with hand-drawn sun compasses, show their skills as designers to the full, and deserve their place at the start of the book.

The old, colour photographs show a housing estate that was clearly a place enjoyed by its first inhabitants and one gets the distinct impression that it was the council’s neglect of the buildings that have led to the current situation.

Finally, a collection of Ioana Marinescu’s more recent photographs – previously the subject of an exhibition at the Royal Institute of British Architects – look very nice indeed, but display a faux-nostalgia for buildings that deserve to be photographed in a contemporary way.

The book has been published on the eve of local London council Tower Hamlet’s decision of which developer will get the privilege of razing the estate, which received its death knell from the previous Labour government when it granted it immunity from listing for five years from 2009.

It is a worthy totem of appreciation to a visionary housing project admired by thousands in its lifetime.

In the mid 1980’s the Vitra Design Museum in Weil am Rhein, Germany became the first building in Europe completed by Pritzker Prize winner Frank Gehry – and fittingly the museum is now hosting an exhibition of his work.

Curated by the Italian Germano Celant, the show presents a selection of projects designed by the Toronto-born architect over the last 13 years, giving an insight into how buildings evolve from early, conceptual phases right through the construction process to the finish product we see.

Visitors will be drawn in particular to the models, every one of which is a piece of art in its own right. Drawings, detailed studies and photographs are also on display, allowing people to see for themselves how the creative process works for Gehry’s practice.

Among the projects on show are the Guggenheim Museums in Bilbao and Abu Dhabi, the Walt Disney Concert Hall in Los Angeles, the Neue Zollhof in Dusseldorf, the Ray and Maria Stata Center in Cambridge, Massachusetts, the Jay Pritzker Pavilion in Chicago and the DZ Bank building in Berlin.

British architect John Pawson is either very lucky, or very well connected, to have his first solo exhibition at London’s Design Museum while he is still practicing his craft. John Pawson: Plain Space celebrates the master of minimalism’s career from the early 1980’s to the present day through a series of photographs, correspondence and architectural drawings and models.

Starting with an insider’s view of Pawson’s practice in King’s Cross, visitors are slowly led through to an impressively long table showing a series of models of unrealised projects and interesting snipets of conversation between architect and client.

Most intriguing is Pawson’s correspondence with the designer Karl Lagerfeld, where the German-born fashion minimalist amusingly questions Pawson’s idea of a tennis court surrounded by a hedge, for his home in the south of France. Sadly, this collaboration was never realised.

A large 1:20 scale model of John Pawson’s pioneering north London home shows how lacking in impact the smaller models are, with large photographs of the space giving a real sense of how his minimalist vision translates in real life.

John Pawson: Plain Space is on until 30 January 2010 at the Design Museum in London.