Edvard Munch may forever be associated with The Scream, his iconic piece of work that exists in five formats – two paintings, two pastels and a lithograph – one of which sold for a staggering $119m earlier this summer. It is therefore refreshing to see a show dedicated to the work of this Norwegian artist that does not display any version.

Instead, Edvard Munch: The Modern Eye sets out to reassess the work of Munch. It proposes a dialogue between the artist’s paintings and drawings made in the first half of the 20th century and his often overlooked interest in the rise of modern media, including photography, film and the re-birth of stage production. Munch is often presented as a 19th century Symbolists and pre-Expressionist painter, yet he is also very much a contributor to art in the 20th Century – an aspect that the Tate Modern is keen to explore. 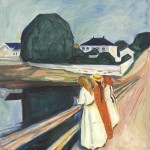 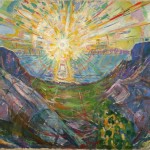 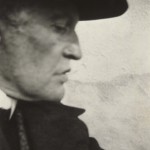 Born in 1863 in Norway, Munch lost his mother and sister to TB at a young age. By his 20s, the young artist was very much part of the bohemian circle who rejected traditional values spending time in Paris and Berlin, following a breakdown in 1908, returning to Norway for a more settled life.

A highly experimental artist, Munch reproduced many of his most famous work – 11 of the Weeping Woman – in much the same way that the likes of Andy Warhol did years later. He liked to work in various mediums and explore the same theme in different formats.

Back in Norway he continued to record new ways of seeing. He was fascinated by photography and the black and white films of his time, and closely followed the latest scientific breakthroughs. His use of prominent foregrounds and strong diagonals reference the advancing technological developments in cinema and photography.

Munch was keenly aware of the visual effects brought on by the introduction of electric lighting on theatre stages and used this to create ethereal drama in, for example, his 1907 Green Room series. The duality of presence and erasure is further explored in key works such as The Sun 1910-13 and Starry Night 1922-24, where matter takes on an ephemeral or ghostlike appearance.

Even though after 1909 he kept a relatively secluded life in Norway, Munch kept a close track of current affairs and responded to the political upheaval of his time through his paintings. Self-portraits also lay at the heart of his work. He depicted his experience of ageing, his emotional turmoil and sickness.

Having suffered a hemorrhage in his right eye in the 1930s, he continued to paint what he actually saw with his impaired eye. Munch completed his last self-portrait in 1940, Between the Clock and the Bed (pictured), a year before he died.

Organised in close cooperation with the Centre Pompidou in Paris and the Munch Museum in Oslo, Edvard Munch: The Modern Eye features over sixty paintings and fifty photographs, alongside his lesser-known filmic work. The exhibition has been curated by Angela Lampe and Clément Chéroux at the Centre Pompidou and by Nicholas Cullinan at Tate Modern assisted by Shoair Mavlian.

Edvard Munch: The Modern Eye is at the Tate Modern until 14 October 2012

Self-expression has always existed, whether in the form of decorating the body or using objects – so the original human act of piercing some kind of pigment or object into the body gave birth to jewellery.

Contemporary Jewellers: Interview with European Artists successfully follows the development of this art and craft throughout the ages. It charts the history of jewellery makers, and explores the important role that self-expression has played in contemporary European jewellery design.

Here the author Roberta Bernabei fully explores the various jewellers in different stages of European history and in particular the post-war development of contemporary European jewellery. She has divided the book into two major categories:  jewellery as content and jewellery as social commentary.

The first category, as the name suggests, is characterised by the meaning it encapsulates and projects. This is shown in the work of jewellers Gijs Bakker, Emmy Van and Peter Skubik.

In the second category, the jewellery has become a vehicle for the delivery of content that often relates to prevalent social conditions, politics, major world events or philosophical questions.

One of the major innovators in this area was Bruno Martinazzi, although others such as Otto Künzli and Ruudt Peters are notable contributors.

Bernabei, a professor at Loughborough University in the UK, has interviewed many of the major jewellery artists of recent years. Each interview is supported by a rich selection of photographs, detailed bibliography and an appendix that locates the jewellers’ work in galleries, museums and on line.

The book is a well-researched documentation of contemporary jewellery design, rich with photographs, drawings and illustrations of each practitioners work. It opens the door to contemporary practice and offers an essential reference for anyone interested in jewellery design.

Contemporary Jewellers: Interview with European Artists by Roberta Bernabei, Loughborough University is published by Berg. To purchase a copy visit here at the DT Bookshop.