There was a time when an artist’s retrospective would see his or her paintings hung in some sort of chronological order – nothing more. That is how Oskar Kokoschka’s paintings in the 60’s and Picasso’s ceramics in the 70’s were introduced to London. It was how, more recently, New York’s MoMA exhibited an expanse of Claude Monet’s work with one room given to his haystacks, another to the Japanese bridge at Giverny and another to the row of poplars lining the river.

We were not told that Kokoschka pined after his friend’s wife and Gustav Mahler’s widow Alma, or that he had written a passable expressionist play to bask in the explosion of colour in his portraits and landscapes. Nor did the MoMA exhibition reveal Monet’s political views during the Paris Commune, or his behaviour towards friends.

Retrospectives have since evolved with Gauguin: Maker of Myth, currently on show at Tate Modern in London, a clear showcase for this transition. Here the artist is presented in his social context to include intimate details of his personal life. 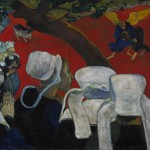 When a few years ago the same London gallery placed Matisse and Picasso side by side, the friendship-rivalry of the two could be seen to have goaded them into greater creativity. Similarly, you would not understand Ashil Gorky, again at Tate Modern, fully without some idea of his relationship with his mother and even more about the genocidal massacre of Armenians in Turkey.

But does the anti-semitism of composer Richard Wagner, or the fact that he had a habit of stealing other people’s wives, change our understanding of his music. Edgar Degas too harboured an intense anti-semitism, but that distasteful fact seems to have made little difference to the appreciation of his paintings. And Claude Debussy was truly beastly to the various women in his life, yet his music resonates with the listener – male or female.

Gauguin: Maker of Myth places his art in the context of his contemporaries, which brings up an interesting and unresolved issue. When appreciating their creations do the beliefs or personality of an artist matter? And does the social context within which he or she works actually matter? Clearly the answer to the second question is in the affirmative.

The Tate exhibition shows that with clarity. By seeing how contemporaries reacted to his raw exposure of colour, or his very personal creation of myths, throws a different light on his paintings and sculptors. Similarly knowing that Wagner fought on the barricades in the pan-European uprisings of 1848, or was influenced my Marx but later gravitated to nationalism, the philosophy of Schopenhauer and finally to a mystic religiosity is helpful in manoeuvring through the earlier operas, the nationalistic sentiments of Die Meistersingers, the German mythology of the Ring Cycle, and the mysticism of Parsifal. They tell us little about the revolutionary impact of his opera Tristan und Isolde.

On a more personal level knowing that Gauguin was a thoroughly nasty person helps explain not just the satirical newspaper Sourire that he created, but also the rather unloving way he portrayed most of the women in the pictures on display in this exhibition. Indeed the only time you can see love at work is in the paintings of his daughter Adele and in a stylised painting of Two Tahitian women (1899). Otherwise the eyes looking back at the artist are sad, unfulfilled, even accusing as is the case with the portrait of his first wife Merahi Metua no Tehamana (1893), or Te Nave Nave Fenua (1892), or Nevermore O Tahiti (1897), or even Where are you Going (1893). Only his own eyes looking back at him his self portraits are loving.

Placing the artist in context of their society and fellow artists is clearly central to our understanding of the creative. And, personal relations and beliefs can be important if they allow a better and deeper understanding of the art. Sometimes such intimate knowledge may cast a different eye on the work. The choice of what to put in or leave out of an exhibition is not always easy. In the case of the current exhibition, they got the balance just right.