There is a delicate neo-classical building on a little hill in the middle of Kensington Gardens nestled in thick grass and wild flowers and with views over the Long Water. You can see Henry Moore’s Arch across the water from here. I often run in Kensington Gardens stopping briefly by this romantic summer house. There is an old tree to its right – the trunk is a good size and perfect for a hand stand. Upside-down, the summer house is even more intriguing. The light from here is very special… in all seasons.

Queen Caroline’s Temple was designed in 1735 by William Kent for Queen Caroline who was responsible for the shape of the gardens as they are now. Some of the graffiti dates back to 1821 when Hyde Park was first opened to the public. Up until this week I had no clue as to the history of this summer house and in many ways the mystique had added to the romance. Now, the building is at the heart of the annual Serpentine Pavilion project which has grown from one commissioned temporary installation to five. This summer Hyde Park has transformed into a feast of architectural dialogue. But more on the summer house later. 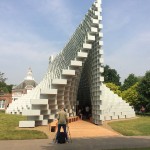 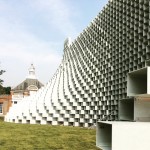 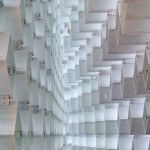 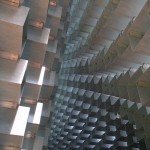 The star of the Serpentine Pavilion is the main structure by Bjarke Ingels Group (BIG) – an exciting practice with offices in Copenhagen, New York and from this week London with a strong focus on sustainability and finding new solutions for urban living. We have reported extensively on BIG in the past.

For the 2016 Serpentine project, some 1,802 modular boxes of equal proportions form both the structure and envelope creating quite a dramatic vista. ‘This is a small structure in a gigantic park,’ mused the founder Bjarke Ingels at the unveiling of the building earlier this week on an equally dramatic English summer’s day as the sky turned abruptly from bright blue to darkness and thunderstorms.

These 400 by 500mm lightweight fibreglass frames are stacked on top of one another and joined by aluminium extrusions transferring the load from box to box for what Ingels calls an ‘unzipped wall’. He explains: ‘This unzipping of the wall turns the line into a surface, transforming the wall into a space’ so the promise is for the complex three-dimensional space it reveals to be explored in new and exciting ways. 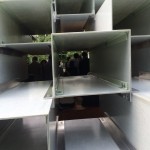 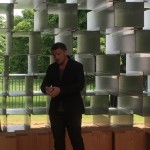 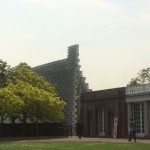 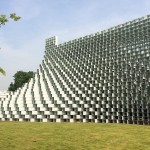 Much like the fifteen pavilions that came before, BIG’s installation will house park goers by day, and in the evenings transform into a space for talks and debates on visual culture in Park Nights. ‘It embodies multiple aspects that are often perceived as opposites,’ says the architect, ‘a structure that is free-form yet rigorous, modular yet sculptural, both transparent and opaque, both solid box and blob.’ In October, when the building is dismantled, these prefabricated modular boxes will find new lives elsewhere in different forms and shapes.

Queen Caroline’s Temple sits a stone’s throw away from BIG’s bold project, and for the second part of the Pavilion project, the organisers have tasked four architects, ranging in age from 36 to 93, to respond to the summer house with very different answers. 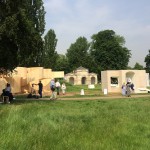 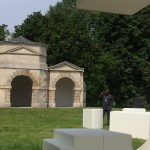 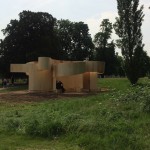 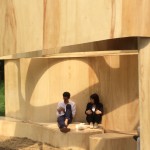 Kunlé Adeyemi‘s is a classic summer house – a space for shelter. The form is an inverse replica of Queen Caroline’s that plays tribute to the original building’s robust form, space and material, says the Nigerian architect.

Barkow Leibinger chose to work with a second building William Kent had designed for Queen Caroline that no longer exists. It had been erected at the top of the hill nearby and would rotate 360-degrees so viewers could survey Kensington Gardens and the lake. Here the American/German firm has created a structure made of loops with a series of undulating structural bands as a nod to this vanished second summer house.

Elsewhere, Yona Friedman’s is a maze of modular wireframes expanding on the Hungarian/French architects La Ville Spatiale 1950s project. Here, the structure is a ‘space-chain’, which constitutes a fragment of a larger grid structure.

Lastly, the youngest of the group, London-based Asif Khan’s project is a secluded courtyard that reflects sunlight. He explains: ‘Kent aligned the temple towards the direction of the rising sun on 1 March 1683, Queen Caroline’s birthday.’ And his polished metal platform and roof aim to provide an intimate experience of this moment in history. 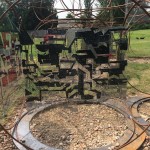 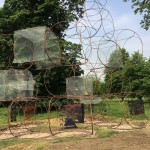 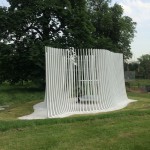 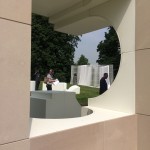 ‘There should be no end to experimentation,’ says the Serpentine Pavilion co-founder Hans Ulrich Obrist, quoting the late Zaha Hadid who was the first architect to offer her pavilion design sixteen years ago, years before she had created an actual building in the UK.

The Serpentine Pavilion scheme is hugely exciting. Since 2000, every year the team commissions an international architect to construct a temporary building in whatever material they see fit – the structure remains in the park from June to October. Past projects have seen buildings erected using plastic, stone, even cork… and it is always fascinating to see how they age, how they withstand the unpredictable English summer, how they live in Hyde Park, as well as how the public responds to them. After all, these are not decorative art installations, but buildings that are there to be experienced.

More than sixty three-dimensional architectural models, mock-ups and prototypes by Danish architect BIG-Bjarke Ingels Group dramatically suspend from the second-floor of the National Building Museum’s historic Great Hall. Hot to Cold: an odyssey of architectural adaptation guides visitors on quite a journey, from the scorching heat of the Arabian desert to the unforgiving chill of the Finnish tundra. The idea is to explore the cultural and climatic forces that shape our cities and buildings. 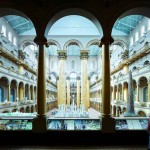 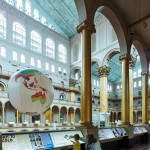 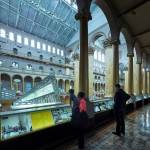 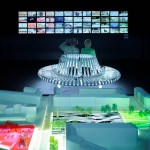 The exhibition looks into the harsh demands of climatic extremes, where architecture is about survival – more about shading from the heat or sheltering from the cold than a visual statement. In contrast, the more temperate environments open scope for culture, politics and legislation to shape the design of buildings.

Founding partner Bjarke Ingels reminds us that architecture cannot happen in the clinical conditions of a lab, stressing it needs to respond to a series of existing conditions, what he refers to as ‘the context, the culture, the landscape, the climate. Our climate is the one thing we can’t escape – the one condition we always have to respond to.’

The exhibition, he notes, explores how architecture evolves in response to its context, but also how life in return reacts to the framework created by the architecture.

‘BIG has perceived the National Building Museum more as a site for a project,’ says the curator Susan Piedmont-Palladino, so that sunlight, the sounds, and the sights of the Great Hall will all be part of the context of the display, much like for a building in the city.

Iwan Baan‘s photography captures BIG’s work, and films by Ila Bêka and Louise Lemoine, Kaspar Astrup Schroder, WAAITT and Squint/Opera document the life that emerges once the cranes have left and the buildings are complete.

Hot to Cold: an odyssey of architectural adaptation is at the National Building Museum from 24 January to 30 August and is accompanied by a catalogue published by Taschen.

These are images of the playful experience centre for Lego in Billund, Denmark designed by one of DT’s favourite architecture practices BIG-Bjarke Ingels Group. Inspired by the modularity of the Lego brick, when it opens in 2016 it will offer a series of engaging installations that highlight the values of Lego.

‘The House will appear like a cloud of interlocking Lego bricks that form spaces for exploration and exhibition for its visitors within. On the outside the pile of bricks form the roof of a new square as well as a mountain of interconnected terraces and playgrounds for the citizens of Billund,’ promises Bjarke Ingels, founding of BIG. 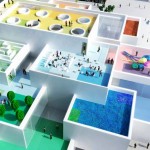 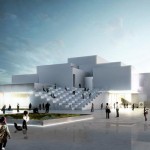 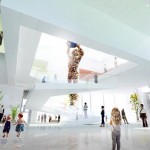 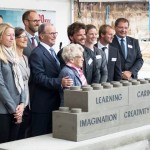 ‘I am very passionate about play and how children learn through playing with Lego bricks. This is essentially the Lego idea and what the Lego House is all about,’ says Kjeld Kirk Kristiansen, grandson of the founder and current owner.

For some of us who spent our childhood stacking these colourful bricks to build buildings, playgrounds, cities… often outlandish ones with Lego, we can’t wait to see the finished product. Watch the video here.

Completely hijacked by commercialism, it is difficult to fall in love with anything that references or represents Valentine’s Day but this interactive heart installation in New York’s Times Square put a smile on our faces.

The work of young Danish firm Bjarke Ingels Group, BIG?NYC is a ten feet tall glowing heart sculpture made of 400 transparent LED lit acrylic tubes refracting the lights of Times Square, and creating a cluster of lights around the heart.

‘The heart reflects what Times Square is made of: people and light – the more people, the stronger the light,” says Ingels, founder and partner at BIG.

The hovering heart will appear to pulsate as its tubes sway in the wind. When people touch a heart-shaped sensor, the heart will glow brighter and beat faster as the energy from their hands is converted into more light.

‘Like a daisy chain of human contact, the more people who hold hands or make contact with others while touching the heart, the brighter and faster the heart will pulse. The BIG? NYC is an indicator of human energy in one of the most energized places on earth,’ notes Daniel Kidd project leader at BIG.

Watch the video on NBC News

Stefan Sielaff joined German carmaker Audi in 1990 becoming head of design in 2006, and apart from a brief spell at Mercedes-Benz interior studio near Lake Como in Italy, he has largely worked within the Volkswagen Group. Here he discusses the marque’s involvement with architecture and urbanism through the Audi Urban Future Awards, and his thoughts on electric car design.

Since the interview Sielaff has announced plans to join parent company VW to head the interior design team starting in February 2011.

Read more reports on the Audi Urban Future Awards including interviews with winner Jurgen Mayer from J Mayer H here and here, and BIG‘s founder Bjarke Ingels here. Also have a look the report on phase one of the awards published in Wallpaper*.