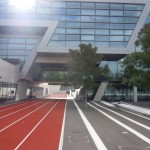 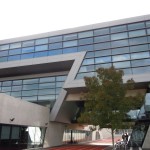 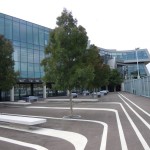 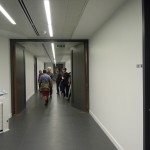 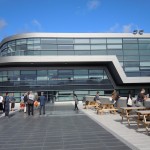 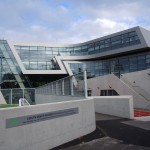 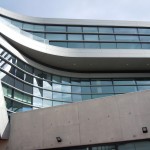 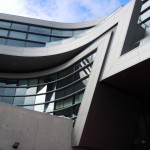 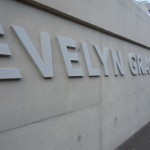 A 100 metre race track bisects the two school buildings, and thick white lines demarcating running lanes run around the school site, carrying the same impact as go-faster stripes against the bodywork of a suped up sports car. Whichever angle you catch this building at it looks ready for a cover shoot.

Inside, an architectural solemnity applies that doesn’t seem altogether fitting for a school; the music studios and sports hall are pale grey concrete, the corridors have grey floors and grey doors, the classroom signage is minimal and metallic, and the main assembly point has a wall of expansive glass wall which could as easily be overlooking an airport runway.

The school has only a small intake as yet, and requires some more time, and student input to shake off the slightly sterile edge.

As an academy, Evelyn Grace cost over £37 million to build. It is graced with considerable investment from a hedge fund manager and has an esteemed starchitect at the helm.

In the eyes of the Stirling Prize panel, Evelyn Grace is the best new buildings of the year. But its success as a school remains yet to be proven and teaching staff are anxious for the school to gain a reputation for its grades as well as its looks.

The RIBA Stirling Prize winner of the £20000 prize was was announced on 1 October.

All rights and labelled images are covered by