Premium marque McLaren Automotive has challenged third year transport design students at the Istituto Europeo di Design in Turin to pen their visions for a hybrid two-seater off-road McLaren for 2020.

Working closely with McLaren design director Frank Stephenson, and the engineering team at the headquarters in the UK, the students developed their concepts based on McLaren’s lightweight carbon fibre chassis ‘MonoCell’ – a feature central to the design and development of the firm’s first road car, the MP4-12C and its future cars.

The three shortlisted projects Holon, Torok and Bio Renovatio, best represent an evolution of McLaren design. The concept cars have since been produced in 1:4 scale models and are on show at the IED.

This is what the students had to say about their proposals:

The year is 2020 AD. In this new eco-oriented world, nature mingles with technology in a mutually advantageous relationship. McLaren has once again introduced innovation into the automobile world with Holon: an extra-sporting sports utility vehicle with a low, aggressive volume and the promise of high levels of performance in all situations.

Holon has revisited the forms of nature and its dynamics in order to create an ‘eco-synergistic’ object that exploits environmental forces. It uses airbreaks to assist the vehicle’s dynamics and piezoelectric actuators to create clean energy.

Holon has a carbon fibre body protected by a shell in synthesised materials that enable fading between surfaces of different nature and the creation of seamless and natural transitions between the glass surfaces and the bodywork, and flexible areas for the movement of the apertures.

Inside, Holon exploits the augmented reality system (ARS) a technology system which can ensure a more intuitive and thrilling driving experience. This is the natural evolution of the sports utility vehicle.

Imagine… choosing your car while being chosen
Imagine… deserving it as much as it deserves you
Imagine… the adrenaline as a fuel, not as a hormone
Imagine… the future as a gift made by your past

Imagine… not having five senses, but 50
Imagine… your car as a continuation of your body
Imagine… not having a way of transportation anymore, but becoming it
Imagine… being able to go out of a world and to enter in another one
Imagine… finding answers to questions you would never reach
Imagine…

Bio Renovatio is a two-seater sport sports utility vehicle. It has a 680hp, is mid-engined with two electric motor-wheels working on the Maglev (magnetic levitation) principle: the front wheels can be used separately as monocycles, the suspension is active and each wheel is a gyroscope with an AI CPU [meaning ‘artificial intelligence central processing unit’, the CPU being a single microchip].

The wheels communicate with each other and with the main processor of the vehicle. The AI of the suspension calculates the algorithm to keep the vehicle’s body on the same level in relation to the relief of the roadbed. Consequently the clearance varies from 3cm to 53cm.

The aerodynamic of the vehicle is adaptable. There is an aerodynamic tunnel that runs from the bottom of the vehicle along the length of the car – from the front to the roof. The system is made using a stretchable materials (GINA) [referring to the 2008 BMW GINA concept] so that the shape can be adapted to various styles of driving such as off-road, sport and mixed.

Also read our interview with McLaren Automotive design director Frank Stephenson who amongst other things talks about the firm’s first road car the 12C. And our visit to the Foster + Partners designed McLaren Production Centre where all future models will be visualised and made. 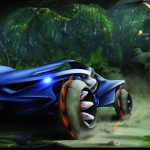 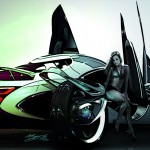 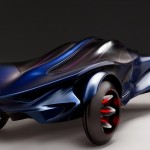 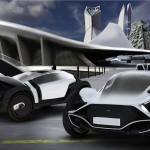 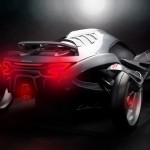