Navigating the streets of London these days can leave a blue note. This beautiful city has in the last few years transformed into a giant construction site – cranes occupying the skyline like arrogant robots. Central London, in particular, is a messy sight.

In the years following the Second World War, a similar scale of construction saw buildings designed and erected to help restore a society. So we saw schools, hospitals, social housing – all planted in areas to encourage social mobility and build a better society. The construction frenzy of 2016, however, seems to be concerned more with making use of every molecule of London for private profit. It is the construction of greed.

The words ‘luxury apartment’ are scribbled on every new build, and mostly used shamelessly out of context. The designs are mediocre; some are simply terrible and built to a standard that will not survive the test of time visually or structurally. 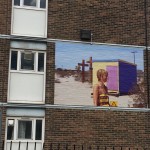 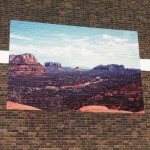 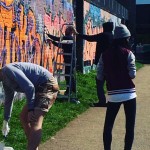 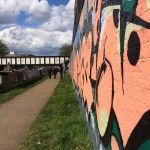 They are erected tall and arrogant on every corner, on busy roundabouts, in former schools, civic buildings, social housing and in areas once deemed un-inhabitable by the very people who will occupy them. Prices are high with the young starting out life here, even middle income families, being flushed out of the city.

Not all is lost though. There are pockets of this great city still untouched by greedy planners. They represent a creatively fertile world, one with a focus on art and design, and inhabited by artisans, creatives and collectives. We witnessed this one warm Saturday as we headed east along the canal that runs across London to Hackney Wick. Here the glitzy skyscrapers give way to raw, rusty warehouses occupied by the young, by exciting artists, designers, craft distillers… makers of all things.

We saw urban artists painting derelict walls. These were scenes out of Wild Style, the cult 1983 graffiti film set in the South Bronx. This is a world far, far removed from the sterile one we left behind in the City. And it is hugely uplifting. 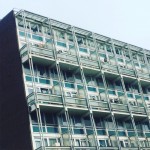 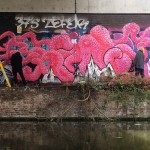 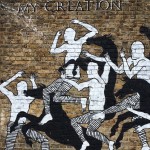 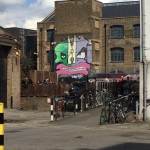 Alas, the rich have little imagination – soon their greedy noses will be sniffing this part of free London. Bankers, financiers and their ilk are generally a colourless bunch, forever occupying the lifestyles of the creative world, then pricing them out. New York is a wonderful example of a city that was once so creatively fertile it was hard to keep up. Even Brooklyn, we hear, has lost its edge; the originals who made it unique are escaping as far as Providence, Rode Island.

Walking along the London canal we came across social housing with great vistas over the city. Some of these buildings are remarkable examples of mid-century modernism too. The 60s planners were generous with their social projects: the idea was for the disadvantaged to be exposed to the good things London has to offer, to live in thoughtfully designed buildings, mix with people of other classes, races and so on.

Architecture and design are essential to how we respond to our environment and ultimately inform the choices we make in life. If London is to remain this inspiring, creative hub… if we are to maintain this as our city’s soft power on the international scene, then it is our duty to respect, encourage and nourish it.