For over a century, the motor car reigned as the supreme toy, the ultimate consumer product. Sculpted and engineered with love and passion, and little concern for safety or the environment, the car was loaded with mixed emotions – love and lust, greed and shame, ego and fear, freedom and danger. The motor car was sexy; dying in one was also sexy. It helped if you held some sort of celebrity status for a brush of extra mystery. James Dean’s car crash death certainly helped immortalised the actor, aged only twenty-four.

Few contemporary mechanical objects have had such a visceral connection with humans. The motor car does ‘bravura performances in the theatre of our imagination,’ writes Stephen Bayley in his latest book Death Drive. But this is about to end, warns the author: ‘The motor car is in historical decline as the Age of Combustion nears the end of its sometimes beautiful, often tragic and always expensive journey.’ 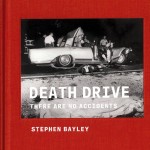 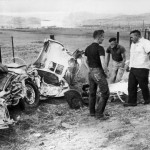 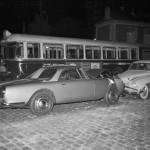 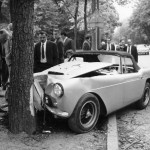 Stephen Bayley is an eloquent writer, and a witty one too. Each chapter of Death Drive is packed with snippets of history, some factual, some perhaps fictional, some fantastically random – the real and imaginative histories blend for a splendid read and a vivid, almost cinematic, glimpse into a moment that feels all so long ago, when celebrities could still be classed as enigmas, before it all became all so sanitised, so dull.

Death Drive is also a note on fate – when life takes its own journey. Bayley references JG Ballard’s famous line in his 1973 novel Crash ‘Deep assignments run through all our lives; there are no coincidences’. In the chapter on James Dean, we are reminded of the actor’s line as he takes part in a US National Safety Council promo on road safety whist filming Giant. ‘Remember the life you save might be mine,’ says Dean in his Giant character Jett Rink, one that also happened to be his very last. He died soon after driving his Porsche 550 Spyder when he hit a big Ford Tudor head-on. Very eerie.

In the chapter on the existentialist writer Albert Camus, the doctor who appeared at the scene of his crash near Paris in a Facel Vega HK500 (‘gorgeously handsome … the bodywork a startling mélange of French and American culture’) was called Marcel Camus!

Death Drive is sheer pleasure to read. Some of the chapters, as with Isadora Duncan’s, ooze colour and texture. ‘She made noteworthy and energetic innovations in the matters of pop eugenics, interpretive dance, high-society socialism and cheerful lesbianism,’ he writes of the brilliantly bonkers American dancer who died when her favourite silk scarf strangled her on-board an Amilcar CGSS in Côte d’Azur. 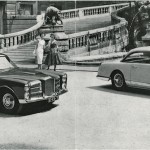 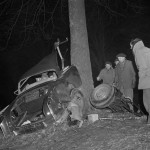 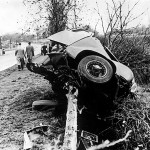 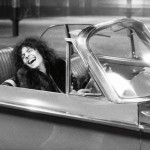 Few people come even close to Bayley’s easy knowledge of cars. You can sense his true love of the motor car beyond the often bland delivery by other writers. For instance, in the chapter on Jackson Pollock, the death car, the Rocket 8’s ‘aggressive, pouting open grille was suggestive of jet propulsion’.

In Death Drive Bayley brings each motor car to life. They are the killers, the murderer in an old Hollywood movie, yet we are never quite sure who’s the villain here. Very Hitchcockian. This is also a thoughtfully designed book where archive newspaper clippings, retro car ads, moody black and white location shoots showing harrowing wreckages, add to the cinematic journey.

The combustion engine, Bayley writes, represented ‘the grand chaos of the high-twentieth century’ when the colourful and over-the-top characters in Death Drive were able to flourish. These heavy and dangerous, expensive objects that were sculpted as if they were a piece of art, and engineered with imagination and love, are thus symbolic of a time no longer.

The twenty characters here were betrayed by their motor cars. Bayley sees this as symbolic of our own betrayal by the promise of this object. ‘Man’s most ingenious tool has also been the most destructive,’ he writes. Ultimately, this is as much a story of glamorous car crash deaths as it is about the intimate relationship between human and machine.

Bayley ends his book on a rather sombre note as he takes us into the next life of the automobile, the nameless driverless vehicle steered by an invisible hand, Google perhaps, which promises to be as expressive as using an ATM machine.

Death Drive: There Are No Accidents is written by Stephen Bayley and published by Circa