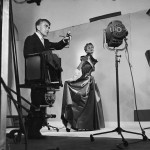 B-Side showcases Hussein Chalayan’s explorations of the body, of movement and of voyeurism – highlighting his fascination with form and process. From pieces represented in new ways, to those making their public debut, the exhibition at Spring Project confirms that Chalayan’s work isn’t just about radical fashion design. Here he is sculptor, filmmaker and animator.

With his inter-disciplinary mindset, the British/Turkish-Cypriot fashion designer is regarded as a leading innovator in visual culture, with a significant body of his art collected internationally.

Speed, displacement and cultural identity all play a role in the two discrete projects on show at B-Side. Chalayan describes Anaesthetics as a ‘film sketch book’ consisting of 11 chapters each based on what the designer refers to as ‘institutions which codify behaviour in order to conceal violence’.

Light boxes isolate imagery from the film. And just as music has always been crucial to his fashion shows, here the designer provides a diverse soundtrack ranging from Bulgarian choir, to songs by Antony and the Johnsons, and Chalayan himself playing the electric guitar.

Chalayan named his spring/summer 2009 collection Inertia. It contained sensational body hugging dresses with dramatic protruding backs created in rubber foam – representing a snapshot of speed and the moment of collision. The moulds are on full display at B-Side.

‘The moulds are really beautiful in their own right,’ he enthuses, adding: ‘but showing them is about process and the in-between moments. I always talk about movement and animation in my work, but this instead is the monumentalisation of the frozen moment. A freeze frame,’ he notes.

B-Side at Spring Projects follows on from an exhibition at the Lisson Gallery where Chalayan created an installation that explores music as a cultural form. The two are a reminder of the his remarkable talent as a leading conceptual artist.

Hussein Chalayan: B-Side was on show at London’s Spring Projects this autumn.