Women were instrumental in forming the Soviet Union, and in the years following the 1917 Bolshevik Revolution they gained considerable rights. A new Soviet man had been conceived around this time – one who was more in keeping with a new country and fresh ideologies –  learned, healthy, muscular, less chauvinistic, less Russian in fact to represent the new Soviet collective.

Logically, a new Soviet woman needed to be conceived based around similar modern values. The idea was interesting but sadly the reality meant this imaginary Soviet woman not only became a productive communist citizen and full-time worker, but a wife and mother, a soldier, scientist, dancer – somewhat of a superwoman. 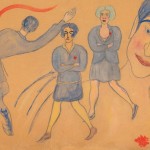 An interesting new exhibition explores the iconography of this Soviet woman, from the time of revolution to its collapse in 1991. Superwoman: Work, Build and Don’t Whine at the London’s Gallery for Russian Arts and Design charts the development, contextualising the propaganda image against a very different reality.

Grad has taken the stories of the images in propaganda, juxtaposing them with the everyday reality of Soviet women told through a range of medium – photography, photomontage, postcards, poster art, ceramics and sculpture. It thus presents an extensive and vibrant exploration of this unique time in history.

The title is taken from a poster by Aleksandr Deineka, one of the leading proponents of socialist realism. On show is also a miniature version of Vera Mukhina’s iconic sculpture Worker and Kolkhoz Woman, which was created for the 1937 Paris World Fair to introduce the ultimate communist woman to the world.

What’s fascinating here is the sheer diversity of work on display. We see crude propaganda posters and naïve advertising showing the Soviet woman as superwoman – all muscles and courage. Elsewhere, simplistic drawings depict quite bourgeois scenarios. Then there are some striking examples of the Soviet flavoured socialist realism, as well as fantastic abstract expressionist work more in-line with the avant-garde. Together they offer a fascinating glimpse into an era which today feels so very very far away. They also shows the sheer power of image to construct realities.

Superwoman: Work, Build and Don’t Whine is on at Grad, London until 17 September.