Lucy Williams takes mid-twentieth-century Modernist architecture as her inspiration to create softly shaded, intricate collages. Working with mixed media, the artist turns these often cold and brutal constructions into warm, human spaces. Even though they remain unoccupied, we can almost feel the presence of people in these diverse settings that include housing projects, government buildings, department stores and swimming pools.

‘I am interested in how the architecture was first imagined,’ says Williams, ‘working from grainy images, the reconstruction of the past, and in turn, the forming of a contemporary narrative, become an element of my practice.’ 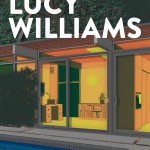 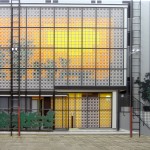 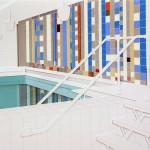 In Lucy Williams the British artist reveals the multiple processes involved with creating her work, displaying her collages alongside photographs of the buildings that have inspired it.

Her intricate work depict deserted scenes. Williams breathes life into these constructions – many of which are sadly no longer in existence. She’s fascinated by process, with craft, working with wool, gravel and cotton to ask us to stop and marvel at their detail and beauty.

Her work depicts the tension of the precision and masculinity of the stark utopian architecture and the painstaking and traditionally feminine domain of craft.

‘The illusion that I aim to achieve is an image that is simultaneously industrial and tactile,’ she writes of the House of Glass at Twilight collage in 2009.

The book covers the work of some of the key Modernist architects – Alvar Aalto, Philip Johnson, Adolf Loos, Mies van der Rohe, Walter Gropius and Eric Lyons – as well as less remembered names. In recent years her concerns have shifted to buildings constructed after the Second World War, and in particular the housing estates around the Barbican Centre in London.

Williams says she is fascinated by the utopian ideal. ‘The period of time that those buildings were made was a period of optimism and hope.’

Watch Lucy Williams talk about her work and the book.

Lucy Williams is published by Roads.

It is Frieze Week, as it is come to be known, and London is at the centre if an art-frenzy. There is so much going on that the sheer volume is exhausting, and it is impossible to keep up. It is also becoming increasingly tough to shine in such an art-packed annual schedule. The art world – its collectors, aficionados, hangers on here for the parties alone – have descended on the capital city, and artists and galleries want to be seen, be heard, be bought.

The London incarnation of the Pavilion Art and Design, established eight years ago as a spin off of its long-standing Parisian sister, has set itself apart by offering more than contemporary art. Here, beneath the elegant pavilion constructed in Berkeley Square, the thick tree trucks of the square extending dramatically within the structure, 20th-century art and design sits happily alongside carefully selected contemporary pieces of art, design and jewellery, as well as tribal and Oceanic art.

The space is limited to 62 galleries only – tiny compared to Frieze Fair and admittedly much more pleasant to manoeuvre. This year saw 45 returning galleries and 17 newcomers with 28 design specialists. 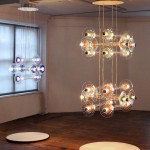 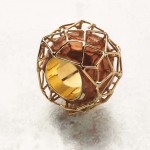 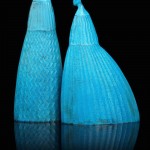 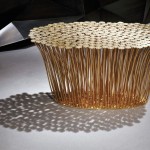 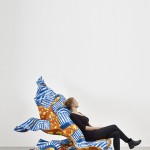 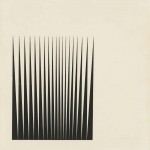 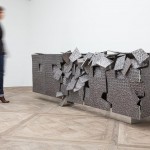 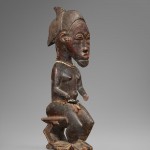 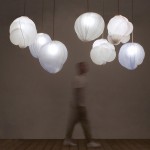 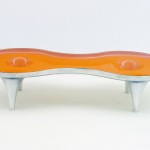 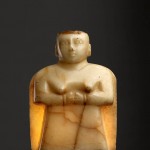 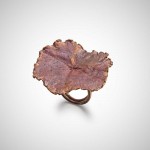 There is plenty to see here. At the entrance Carpenters Workshop Gallery presents Windy Chair 1 by Yinka Shonibare inspired by the artist’s work Nelson’s Ship in a Battle. It is a vibrant sculpture as well as a functional seat expressing his dual nationality by the movement of fabric – the colours are inspired by his Nigerian background – caught in wind.

PAD London has evolved through the years to increasingly offer this mixed-genre collecting. Ultimately what sets Berkeley Square apart is that it presents very much a niche, you could say continental sensibility, a far cry from the more global one offered by the larger fairs  here this week.

What would you think of a show where every print was covered with hammers and saws and an almost endless variety of spanners, scissors, tongs, pliers, and pincers?

Jim Dine’s A History of Communism at London’s Alan Cristea Gallery offers a complex array of impressions. I came away impressed with the ingenuity, intrigued and a little moved too, but also somewhat uneasy. Let me explain.

Dine has used a series of lithographic stones left over from an art academy in the German Democratic Republic that was given to him by his friends Sarah Dudley and Ulie Kuhle. These were presumably made by students in the academy over the years. He then worked over the drawings using symbols, some of which he normally uses in his own art works, to give his personal narrative, a history of communism as he saw it.

The original lithographs ranged from the amateurish attempts at a portrait of an old man or elephant, to heroic muscular soldiers, determined miners and a serious looking female worker whose piercing gaze and resolute lips would have been looking down from countless posters and tracts across the country exhorting hard work, and projecting the optimism for a future that seemed forever round the corner. It is what Dine did with these lithographs that is fascinating.

There are the scissors arrayed in a semicircle, eyes at the top, through which one can see an industrial landscape –like a sinister line up of prying eyes fanning across the country, observing every move made by the workers.

Or the juxtaposition of a saw with a female head, as if it is about to be sawn off. In another print a spanner looks for all the world, like a Tyrannosaurus rex about to pounce and devour a heroic horse, while on the other side a man and a horse are wielding a huge hammer about to give it a lethal clout.

Then there is the nude, her head and long hair falling back in an ecstatic pose, surrounded by clouds of black nothingness, dark gloom.

What is perhaps remarkable is that Dine seems to be kinder to the more propaganda-like lithographs. The two hammers surrounding the head of the heroic soldier face outwards. And then there is a portrait of an old man with glasses and a penetrating gaze who has a remarkable resemblance to Walter Ulbricht, the tyrannical first leader of the German Democratic Republic.

What is unclear is whether Dine had created the portrait or he had touched up the original to make it look like the dreaded ogre. Whatever the relative contributions of student or artist, it is a remarkable, dark and strangely beautiful hybrid.

While walking around the exhibition one of the other visitors asked me a question that left an uneasy sense. What are the ethics of using original works by others without their permission, he asked. I guess they would never have got the exposure if Dine hadn’t done what he did, he quickly added. Yes, I replied, I too feel a little uneasy, particularly as some of the students are probably still alive today.

As to the exhibition title, this is clearly not a history of communism. Even the GDR did not even call itself socialist, let alone communist – after all, it was a supposedly ‘democratic’republic. The exhibition should perhaps be more appropriately titled The history of American exceptionalism.

Be that as it may I came away with a feeling that the epithet ‘extraordinary’does correctly describe these prints. They are well worth a visit as is the accompanying exhibition Jim Dine: Printmaker, with fourteen recent additions as well as classic prints to celebrate the artist’s fifty years as printmaker. There you can also see Dine’s trademark of hammers used in a different, non-political context.

Jim Dine: A History of Communism will be in Alan Cristea Gallery, Cork Street, London from 10 September –7 October 2014.

Pavilion Art and Design doesn’t discriminate among genres. This is the premise for the annual event – that sophisticated taste will like to see contemporary art and photography displayed alongside modern design, decorative arts as well as tribal art and sculpture. The result is an exhibition hall that is a pleasure to navigate for the observer and collector. 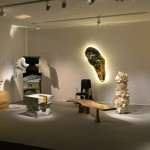 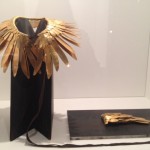 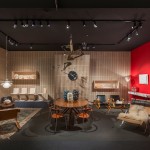 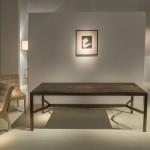 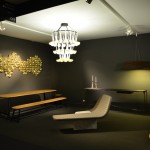 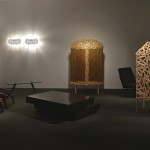 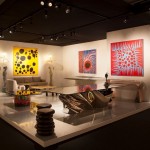 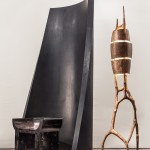 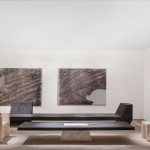 The annual fair, founded in 1996 by Patrick Perrin and Stéphane Custot in Paris, is housed in an elegant pavilion constructed for a week in London’s Berkley Square. This year the fair attracted more than 60 international dealers. Their exhibits included work by Mira Schendel, Richard Avedon, Egon Schiele and Joan Miró united here with exquisite pieces by Gió Ponti.

For many of us, the main draw of the fair is the contemporary designers. This year’s highlights included work by Rick Owens at Carpenters Workshop Gallery, Hélène Binet at Gabrielle Ammann Gallery, and in particular Ranya Sarakbi at newcomer Beirut gallery Smogallery.