‘I’m interested in space and the movement of people and objects within space. There is a certain magic to it. It is as if you are inventing an order of things. I believe there is a secret relationship between space, objects and perceptible and imperceptible movements. Every artist working in this field tries to interpret that relationship in his or her own way. It is the composition and balance of those elements that give rise to the essence of drama and – why not? – the essence of life itself.’ These are the words of Isamu Noguchi, one of the most lyrical artists of the last century.

Known today mostly for his much-copied 1944 Coffee Table (an early edition of which sits here before me) and Akari paper lights, Noguchi tirelessly pushed the boundaries of art and sculpture. Working across almost seven decades and with a multitude of materials and mediums, his carved stones, stage sets, paper lanterns, portrait busts, mobiles, and playgrounds were collectively designed to be tools for understanding our place in the cosmos, and our relationships to history, nature, and one another.

The Barbican gallery in London is hosting ‘Noguchi’, the first of a touring European exhibition which sets out to document the work of this visionary creative. Thematically organised and curated to feature only the words of the artist himself, the exhibition successfully immerses the viewer in the mind and the world of Noguchi. The stripped back béton brut halls of the brutalist Barbican and the advantage of the two levels, allow the 150 works to breathe freely, and with the absence of excessive curation, the viewer is left in an almost meditative state to observe and absorb.

Born in Los Angeles in 1904, Noguchi’s mother was an Irish American writer and his father a Japanese poet who had abandoned the family on his birth. At the age of two, his mother took him to Japan to reunite with his father, sending him back to the US and onto Indiana for schooling for fear that the biracial child would receive racism in Japan. Noguchi eventually settled in New York where he trained in traditional sculpture, but his real break came while on an internship at the Paris studio of Constantin Brancusi. Here Noguchi gained a seminal introduction to the modernist principles of abstraction and presumably met the international avant-garde who were gathered in Paris in the 1920s. It was thanks to Brancusi that he became passionate about materials and craft – elements that remained fundamental to his work throughout his career.

By the end of the decade Noguchi was back in New York sculpting portrait busts, mainly to make a living, many of which are on display at the Barbican. They are a curious mix of expressionist and whimsical. He later referred to them jokingly as ‘headbusting’ since it was a useful way to make money and meet people. It seemed to have worked as they attracted the attention of the pioneering choreographers Ruth Page and Martha Graham for whom Noguchi went on to design sets using an interplay of his sculptures. He also befriended the architect and theorist R. Buckminster Fuller, who he referred to as the ‘messiah of ideas’. The two shared a vision for shaping a more equitable world through technology, innovation and design, collaborated on several projects including a futuristic car.

By the 1940s, Noguchi was working with manufacturers Knoll and Herman Miller. He continued to explore the possibilities of material and form with his interlocking marble slab sculptures and Lunars lights, created after his devastating experience of ‘voluntary’ internment at a camp for Japanese Americans in Poston, Arizona in 1942. The Lunars went on to influence some of his best-known works, the sculptural and ethereal Akari light sculptures – a contemporary take on traditional chochin paper lanterns using washi paper and electric bulbs. After the war, Noguchi travelled to Europe and Asia to understand the different uses of sculpture in a spatial and cosmic sense. He wrote at the time, ‘I find myself a wanderer in a world rapidly growing smaller. Artist, American citizen, world citizen, belonging anywhere but nowhere.’

Noguchi went on to complete over twenty public works around the world – gardens, fountains, playgrounds, plazas – using space to challenge civic and social life and its intersections with nature and time. His final contribution was Moerenuma Park. Located on a reclaimed municipal dump outside of Sapporo in Japan, it included play sculptures, fields, and fountains, and a revised version of his first-ever play rejected concept, the monumental, stepped pyramid he called Play Mountain (1933). Moerenuma Park was realised two years after Noguchi’s death in 2000.

Ultimately his was a life dedicated to sculpting the world he wished to inhabit. With a deeply humanist perspective, heightened by his prison experience, Noguchi understood the power of art and artists to make sense of the world. His work was political art. Wandering the exhibition, immersed from above and below in his delicate paper lanterns, colourful furniture, architectural playgrounds, and expressive and often funny abstract and figurative sculptures, you get the sense that in life and work, Noguchi remained an explorer with a philosophical and playful eye. In his own words: ‘Art for me is something which teaches human beings how to become more human.’

‘Is design an expression of art?’ we hear a voice ask Charles Eames to which he replies ‘design is the expression of purpose’. The video completes The World of Charles and Ray Eames, a brilliant look into the life and work of Charles (1907-1978) and Ray (1912-1988) Eames, two of the most celebrated designers of the last century.

With its timeless modernist aesthetic and utopian vision, London’s Barbican Centre is a perfect set for a discourse on the Eameses. For over four decades, the Eames Office, the ‘laboratory’ as it was often referred to, in sunny California produced an array of pioneering and experimental work. 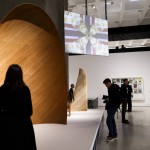 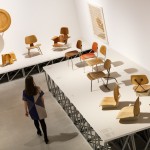 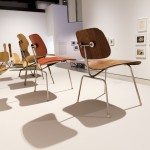 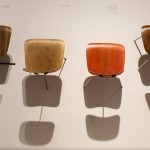 Here architecture, furniture, graphic and product design, painting, drawing, film, sculpture, photography, multi-media installation and exhibitions were explored. New models for education were envisaged at the Eames Office not just for the US and the western world, but India and beyond.

For many Charles and Ray Eames are associated with their iconic furniture. Yet for them, ‘design was not simply a professional skill, it was a life skill – more than that, it was an essential attribute of life itself,’ says Eames Demetrios, director of the Eames Office.

The couple thus moved fluidly between the mass-production of objects for everyday use and the transmission of ideas through exhibition, film or installation. Much like the European Bauhaus contemporaries (many of whom had moved to the US after the war) their concern were to connect art, science and technology, to educate society, and to utilise good design as way of improving life. 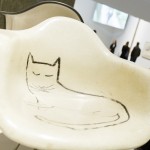 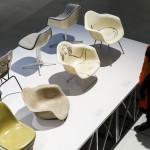 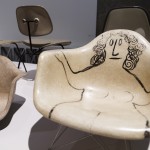 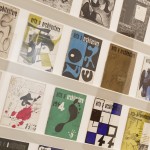 It really is fascinating navigating these rooms, browsing through endless documents and videos, listening to ideas on the future, how to integrate craft and technology, embrace the coming global ‘information age’. Some of the concerns and ideas expressed here remain valid today.

Charles and Ray established their studio against the backdrop of the Second World War. One of their first mass-produced products was an emergency transport splint in moulded plywood and shaped to the human form. The project helped the team to find ways to mass-produce the moulded-plywood furniture Charles and his friend, the designer Eero Saarinen had been experimenting with the previous year, and it enabled the couple to open the Eames Office on 901 Washington Boulevard, Venice, and Los Angeles, California, where it remained throughout its history. 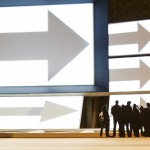 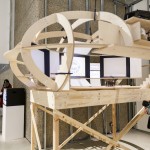 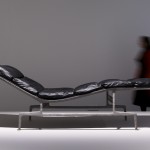 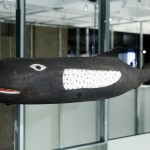 We particularly like these notes, featured in the accompanying catalogue, and drafted by Charles in January 1949 to advice students. They describe the workings of the Eames Office beautifully:

Make a list of books
Develop a curiosity
Look at things as though for the first time
Think of things in relation to each other
Always think of the next larger thing
Avoid the ‘pat’ answer – the formula
Avoid the preconceived idea
Study well objects made past recent and ancient but never without the technological and social conditions responsible
Prepare yourself to search out the true need – physical, psychological
Prepare yourself to intelligently fill that need
The art is not something you apply to your world
The art is the way you do your work, a result of your attitude towards it 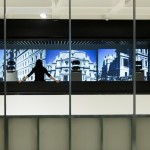 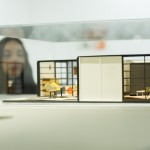 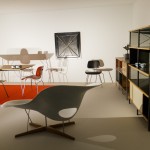 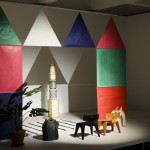 Charles and Ray Eames collaborated and associated with the leading artistic figures of the 20th century and their immediate circle included Buckminster Fuller, Alexander Girard, George Nelson, Isamu Noguchi, Eero Saarinen, Saul Steinberg, and Billy Wilder. And the 380 works displayed in the concrete halls of the Barbican are a legacy of post-war modernism.

The exhibition addresses the Eameses impact on concepts of modern living – the couple’s editorial eye and mastery of form and material yielded some of the most iconic designs of all time, not least their own home completed in 1949. Here modernist furniture live with old battered books, paintings, oriental rugs, antiques and effigies. This is a home that is as much about aesthetics as creating a warm, loving, liveable environment to encourage productivity, growth, pioneering thought.

The Eameses were forever challenging themselves to improve on their work. And they seemed to be having so much fun! Archive photographs depict this handsome couple smiling, laughing, interacting with their team at the Eames Office. This was a partnership in life, work and ideology… and it is hugely inspiring.

This is the first major UK exhibition of the work of Charles and Ray Eames in over 15 years, and it is not to be missed.

The World of Charles and Ray Eames will be at the Barbican Art Gallery until 14 February 2016.

The accompanying catalogue is edited by Catherine Ince and Lotte Johnson and published by the Barbican and Thames & Hudson.